Happy Halloween everybody! We hope you all had a great one. 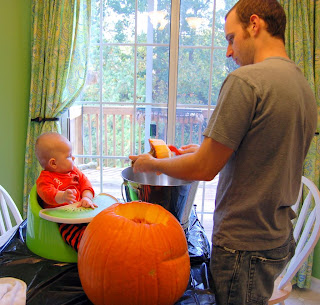 Our Halloween festivities began a couple weeks ago when we went to pick out some pumpkins. We got around to carving those pumpkins this last weekend. I had planned to carve all three but after the first one was finished and we only had an hour before we had to be at a Halloween party, I gave up. Patrick had a lot of fun watching and talking to the pumpkin while I was carving. He wasn't sure what to make of the insides though. He seemed very suspicious of the cold, gooey mess. Luckily, he didn't try to eat it. 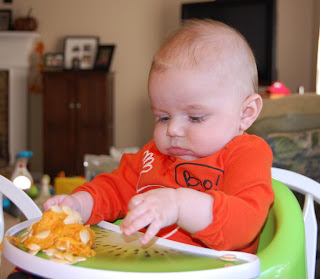 Even though Patrick has no idea what Halloween is and couldn't care less about candy and witches and Charlie Brown, we were still pretty excited since it's his first one. We (and by "we" I mean "Angie") started looking for a costume over a month ago for him to wear. We wanted to get something for him that he could lay around in since that's about all he does and wouldn't be too hot, since we weren't taking him door to door or anything. We ended up deciding on dressing him as a lobster. I have to say, he made a pretty cute lobster. And thankfully, he's either not old enough to care or is just laid back enough that he didn't mind wearing it for most of the night with the head piece and everything.

Here he is hanging out in his lobster pot: 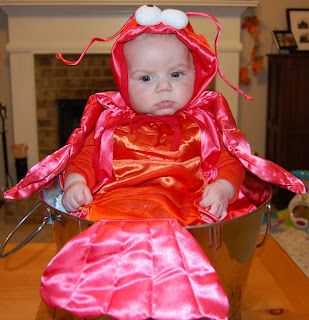 I was looking for an easy costume and the first thing that popped into my head was "hey, if he's gonna be a lobster then I could be a chef!" That idea was good for about three minutes until I realized that that means I'd be cooking my child. But, I didn't feel like thinking of anything else so I stayed with the chef idea. Here are a few pictures of the two of us. Don't look at them too long or else you'll start thinking about how morbid it is (and no, it wasn't my idea to put the pot on the stove - you can talk to Patrick's Mom about that one): 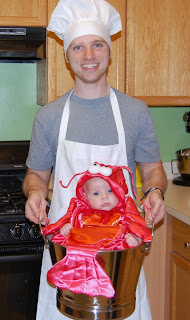 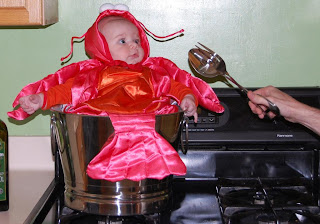 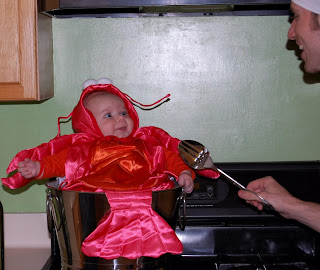