(Update: new link to new pictures at the bottom of the post! Thanks Aunt Mandie!)

Back in February, our Madelyn turned three years old. I'm not sure how that happened since I specifically asked her not to do that and to just stay two a little bit longer; but, she's got a strong will and went ahead with the birthday anyway. As usual, we had a small celebration for her at the house where we gave her a few gifts, she got to pick dinner and we had a small cake. Then we had a bigger party with friends and family and, of course, a theme.

Madelyn's main gift this year was her new big girl bed. She had been dreaming about it for months and wanted it to be pink with a big pink canopy "like a princess has." Angie found the perfect sized pink bed on Craigslist and we found a canopy that looked like something a three year old's impression of a princess might like. Needless to say, she was VERY happy to find it in our living room when she came down from nap... 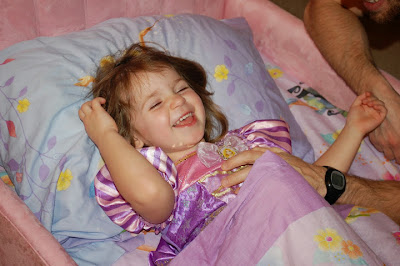 We brought it up to her room, hung the canopy and let her put some fairy stickers on the wall and she was ready to go. 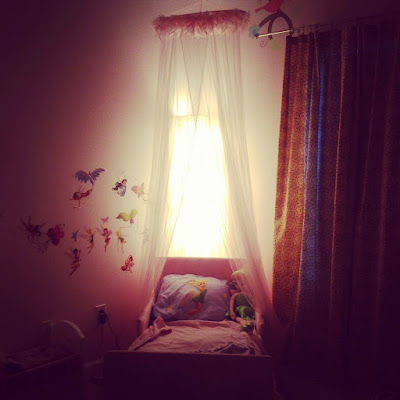 For Madelyn's big party, she wanted a (surprise) fairy theme. And probably at the suggestion of her brother, she later added that she might want "some pirate fings too." So, we went with a Pixies and Pirates theme and everyone was happy. Angie, as usual, went all out on the themed food, games and decorations with help from Meme and Grandma and we even got a package full of pirate goodies in the mail from our friends Piper and Beckett Finn who live in NC. The kids seemed like they had a lot of fun and I know we had a great time. Rather than explain too much about it, I'll just put up the video and link to the picture gallery. The song is Audrey Assad's "Ought to Be."


And here's a slideshow of the pictures from her birthday at our house and the friend/family party. Or you can go right to the gallery by clicking this bad boy. UPDATE: Aunt Mandie has a whole album of pictures as well you can treat your eyes to right here.

The Adventures of Pokey the Swordfish

It's kind of amazing what a great father does each day, isn't it? He breezes in the house in the evening, leaving all work stress at the door and is totally present, trying to fit in eight hours of quality time into the twenty minutes before dinner. He's tackled and tickled by little people before he can even get inside the house. He's listening to how my day went and answering questions about dinosaurs and space and pirates and watching a ballet recital/rock concert all at the same time. He helps with dinner and puts the wash into the dryer as he changes out of his work shirt while simultaneously playing, "Hey, hey, you crazy!" [monster game]. He's spraying for aunts, watering the garden, pushing the kids on swings. He serves as DJ and professional kid-spinner for the after dinner dance party and referee for the many mini-battles during bath and story time. And with kisses and hugs and prayers its bedtime. A whirlwind of an evening, every evening. But somehow he makes it magical. And for that we love him even more.


Just one of the many reasons I love this man - the bedtime stories he tells the kids. It's no wonder they love him as much as they do.
Posted by Angie at 6/16/2013 3 comments

A couple months ago, I got this picture from Angie while I was at work in a text that said "We found a frog in the back yard and he's going to be our pet!"

Here's a better picture of him...

Knowing how much my kids (especially Patrick) are in love with all animals, I knew she wasn't kidding when she said the frog would be our pet. Because if the kids found then captured a frog and it didn't bite either of them or hiss or something, there's no way they're letting that thing go. His life was now theirs. I half-expected them to start throwing sticks into the frog's little habitat saying "It climbs the sticks when they are thrown in. It does this whenever it is told." (If you've never seen Silence of the Lambs, GO WATCH IT NOW. I can wait.)

Then, throughout the day, I got pictures like this one with captions like "Guess who's blasting off!"


And "Guess who's saving the town from a fire!"


"Guess who's going for a tractor ride!"


I fully expected the frog to be dead before I got home. But amazingly, he was alive and as happy as a frog is able to express.

And so, we kept him. We found out that he was a grey tree frog and could climb pretty much anything in our house. He would jump from Patrick's shoulder onto the wall and then jump back onto the next person that walked by to hitch a ride somewhere else. It was all pretty cool.

One of Patrick's favorite things to do was race the frog up the wall. Patch was excited to have a climbing buddy and also excited to win every single time since his opponent has a slight size disadvantage and no idea he's even supposed to be racing.


If it's hard to tell what's happening in that picture here's a video of Patrick climbing the door frame to get to the pull-up bar. As much as I wince every time he drops down, I'm glad he does that now rather than what he did before; which was climb to the top whether you were close by or not then start yelling for someone to come get him before he fell with about 2 seconds of warning. I learned I can run to the kitchen door from almost anywhere in the house in a very short amount of time when necessary.

We also had to feed the frog. We tried all kinds of stuff the first few days but he didn't eat any of it. Then we finally went to the pet store and got him some small live crickets and he went bananas for 'em. Sometimes we'd put the crickets in the habitat with him and let him "hunt" them (sit really still until a dumb-as-bricks cricket literally jumped onto his face) and sometimes the kids would feed them out of their hands. This is video of the first time they fed him from their hands. I LOVE how excited they get.

Here's a better angle. I also love how closely Madelyn pays attention to Angie talking about the frogs tongue at the end of this video.


And so it went for weeks. I REALLY thought the frog wasn't going to make it past the first week with how not-so-gentle the kids can be in their excitement to "play" with him. But they did great and the frog kept eating and drinking and doing all the other normal frog things frogs tend to do. Both kids tried sleeping with the frog in their room but they both kicked him out after the first time he croaked really loud after they had fallen asleep. His croak is loud enough when we hear him in our yard - when he's in the same room, it's pretty darn loud.

Then one day, Patrick seemed to suddenly feel a little guilty about keeping the frog in our house. He talked to us about it on and off all day and we did our best to answer his questions but it just didn't sit right with him that we had taken the frog "out of the wild" (his words). A few days later, Patrick decided we should let the frog go. I was at work but Angie said Patrick was saying things like "he came from the wild, we should put him back in the wild. We didn't buy him from the pet store. He's not really ours. He should be with his family and friends." Angie assured him it was OK if he wanted to keep the frog but he had made up his little mind. Mr. Ribbits needed to be released.

So they took him out and Patrick cried as he let Mr. Ribbits go in the yard close to where they had found him. He kept saying things like "It's OK buddy. You'll find your friends and your family again. They'll be so happy to see you." crying the whole time. It was heartbreaking. But we were SO proud of Patch for making a tough decision, completely on his own, and going through with it even though it made him really upset.

That night, we heard the frog croaking in the back yard and Patrick started crying again but smiled and said "He sounds so happy!"