In the series of pictures below Patrick is trying to explain a rocket launch to Madelyn who is more interested in her fairy book. 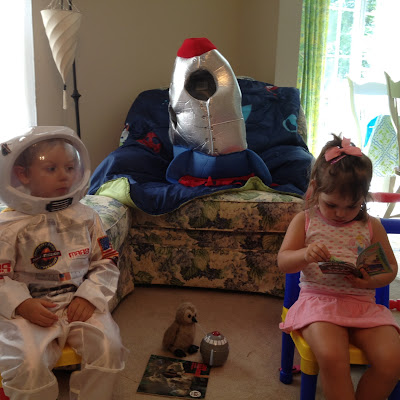 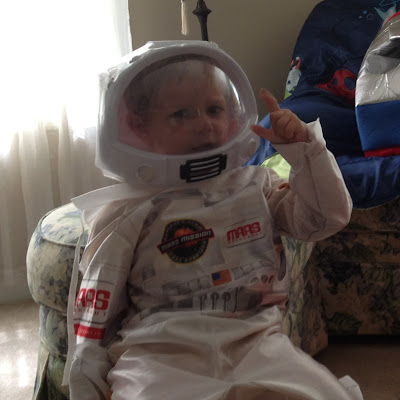 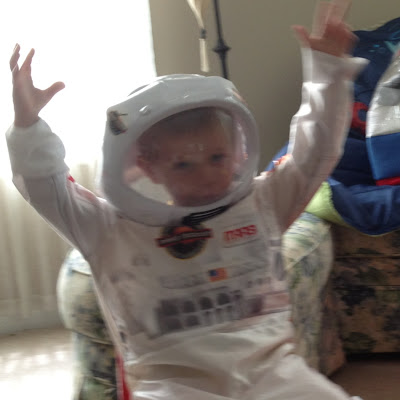 After several minutes of talking and gesturing wildly, simulating a rocket blasting off, he realizes Madelyn is not paying attention.

Madelyn's reaction is pictured below... 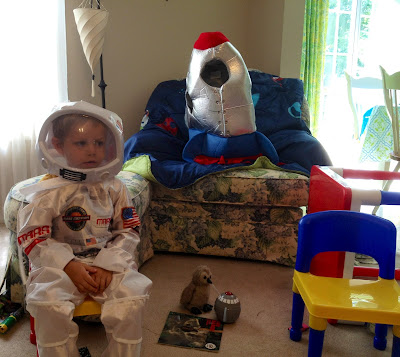 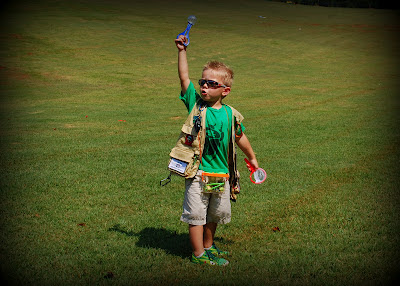 In the beginning stages of planning Patrick's party (it's not as big a planning ordeal as that makes it sound like. There are only about two stages.), we asked him what kind of birthday party he'd like to have. Without even having to think about it he said "spectacled porpoise." We had flashbacks to him trying to choose a Halloween costume a few years ago. We told him that might be kind of a hard theme to go with so maybe we should make it a bit more generic. He said that was fine and offered up "striped common dolphin" as a theme instead. While the word "common" is technically part of the name and he was trying to be helpful, it didn't really help at all. All our attempts at "how about a dolphin party or an ocean party" were met with less than enthusiastic replies. 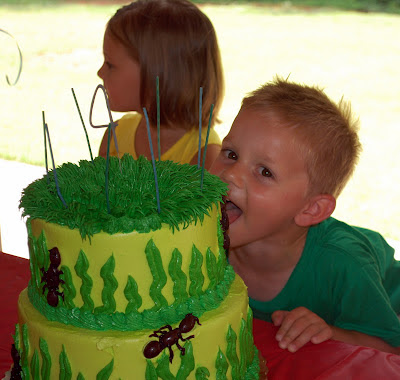 Over a few weeks though we were able to shift gears to an insect party. He was completely on board with that idea. That is, until he saw some of the invitations we were looking at and noticed a spider or two crawling around on them. "It can't be an insect party if there's a spider on the invitation. He's an arachnid. Not an insect." he explained very matter-of-factly. And so it came to be that we had a "bug" party. All creepy crawlies included.

This is Patrick at 4.

For him, things HAVE to make sense. There should be a logical reason behind everything we do (at least, logical in the mind of a four year old - otherwise, how do I explain him spending half his day pretending he's a cat named Miles and his sister is a kitten named Peaches?). He's curious about everything and wants full, detailed explanations of why things are the way they are. I get nervous every time we touch on topics like life and death, people being "mean" or where babies come from because the second he starts down those rabbit holes there's no going back and I'm not sure I'm prepared to explain to him in the detail he'll demand what death really is, why some people just aren't nice or how babies come to be. But his intense desire to learn about the world is probably my favorite thing about him and he amazes me every day with what he can, and wants to, learn. 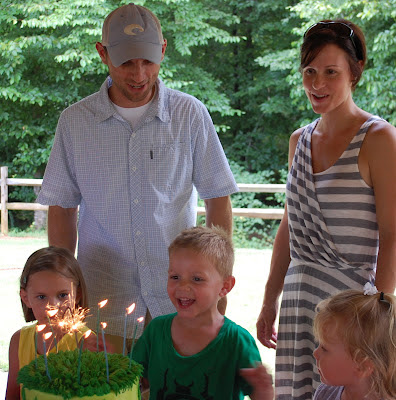 Another good example of Patrick at this age happened a few months ago. We were eating breakfast, just the two of us, and out of nowhere he started telling me about something that had happened at school the day before that had clearly been on his mind...

Me: Oh yea? So what happened?

P: I got the seesaw from the toy bin and I put the treasure on one side and the coins on the other. And the coins went all the way down to the ground!!"

Me: So you were right! What did James say?

P: James said we should put more treasure on! 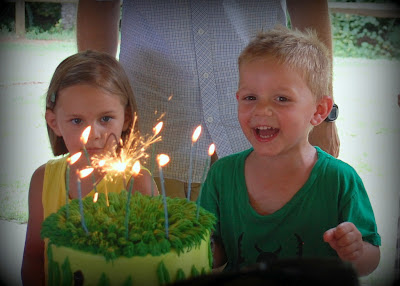 The last line was said with complete exasperation. Patrick was totally befuddled that his classmate didn't understand what had just happened and that Patrick had proved him wrong. I couldn't care less if Patrick was right or wrong about what was heavier; the part I was proud of was that he realized that just because he said one thing and another person said the opposite didn't make either one of them right. He realized that he needed some objective way to test who was right and then figured out the best method for that scenario. He actually said to me, "James kept saying the treasure was heavier, so then I wasn't sure. But I knew the seesaw would figure it out."

And that is why I avoid arguments with Patrick. (Well, that and the fact that he's four. If you're seriously arguing with a four year old, you've already lost.) If I give him a reason for something I better make sure I've got the facts to back it up because he will ask me to prove it and if something sounds fishy, he'll jump all over it. 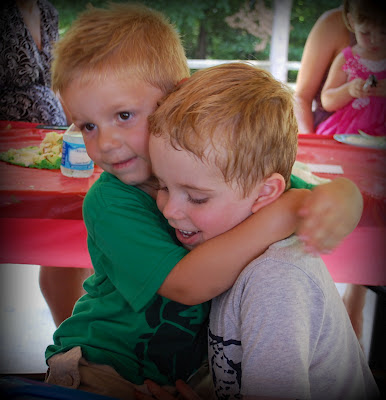 Despite Patrick's constantly working brain, he has one of the biggest hearts I've ever seen on a kid. It takes him about five seconds to become attached to something (even less if it's an animal and even less if that animal is small) and start trying to nurture it or protect it. He hates when people are unhappy and can be brought to tears at even the hint of a sad story. He's not a fan of scary things and doesn't like books or movies where someone is being mean to another person. A lot of his day is spent rescuing pretend animals around the house and yard. There is almost always a baby [something] in trouble that needs saving and Animal Rescuer Patrick is there to do it. You'll notice in the video below that Patrick makes sure to hug every person who gave him a gift, often before he even opened the present. 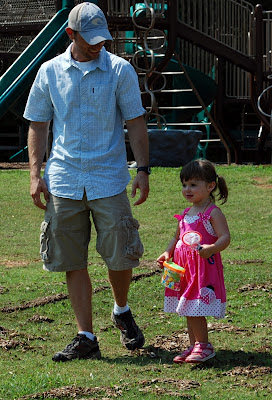 And of course, he is still completely in love with his little sister. She is his assistant in the animal rescue center, his first mate on the whale-saving ship, his nurse in the animal hospital and his best racing buddy when they need to drive fast. He considers it his duty to impart all his knowledge of the world onto Madelyn and is still confused when she walks away 3 seconds into his explanation to go play something else. If she wants to really push his buttons she'll just flat out deny reality and watch his head spin. "No Patrick, Roxy isn't a doggy." For Patrick, he has no idea how to counter an argument like that and it's honestly kind of hilarious to watch as Maddy slyly smiles and he tries to think of any way he can to bring her back to the real world. In the end though, they always end up giggling while hugging and rolling around on the floor or chasing each other around the house. 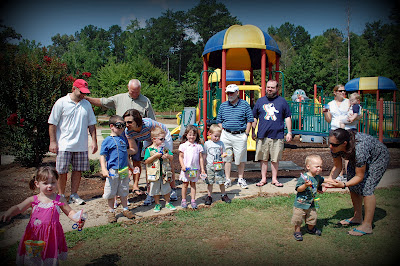 Patrick's birthday party this year was really fun for us. We had it at JJ Biello park where there's a covered area, two huge playgrounds and a giant field. Patrick wanted to do a bug hunt but we knew it would be hot and some of the older kids might be bored with that. So, we put plastic bugs inside water balloons and spread them all over the field for the kids to pop and gather the bugs. We had a little over 70 balloons and it turned out to be a fun activity for a hot day. Patrick had an amazing time playing with all his friends and couldn't stop talking about the day for weeks. He got completely spoiled too and has loved literally every single gift he received.

Here's a video from the party. The song is one of the kids' favorites right now from Matt Maher. (PS: there are no good bug songs for kids videos. Can someone please fix that?)


Thank you thank you to all the family and friends that came to Patrick's party or called to say happy birthday or sent cards. We can't believe he's already four years old but we couldn't be happier with who he is!


Here's a slideshow of pictures from the birthday party or you can go to the gallery here:

*Sorry about filming a video in portrait. It's the worst and people who do it are the worst. But in trying to capture this moment a few months ago, I was unable to think clearly. Can't imagine what could have been distracting me.
Posted by Toby at 8/01/2012 1 comments