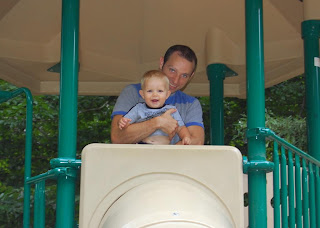 Yea, it's been a few weeks. But, I have been updating the Twitter feed on the right-hand side of the site with pictures along the way, so it hasn't been complete radio silence.
Anyway, things have been great here. We're getting in a good routine with Angie's work and Patrick's school on Mondays and Tuesdays. Angie really likes her new job and Patrick is learning to like school a little more every time.
So far, he's adapted pretty well to being without us two days out of the week. He still cries when I drop him off in the morning but his teachers assure me he quits right after I leave and he mostly has fun the rest of the day. He's still not 100% comfortable, but he's getting there.
The funniest part for Angie and I is to see what behaviors he learns both from the other kids at school and from the reactions of his teachers. As parents of one child, we have the luxury of thinking through all of our reactions and responses to make sure we're steering him towards the way we'd like him to act. So, if he starts yelling for something, it's usually easy for us to make the decision to not react to his yelling and instead wait for him to ask for something calmly. Which is not to say that we always react correctly, just that we have the time to try to. But, when you're a teacher with 5 kids all around the age of one, you don't have that same luxury. They're are likely times when the squeakiest wheel gets the snack. We noticed after Patrick's first two days of school that he started to fake cry when he wanted something, which he had never done before. Then one day when I dropped him off, I saw one of his new friends doing the same thing and suddenly realized where Patrick had learned it.
Of course, he's learned far more really good things so far though. They 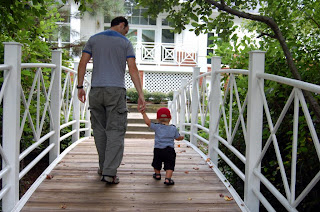 practice different languages, spend a ton of time outside, read books, do art projects every day and even baby yoga - which is mostly just having the kids put their arms in the air or on the ground. But it's still really cute.
The couple pictures in this post are from our time at the playground last Sunday. We had a blast and Patrick went nuts over the slides. You'll see him sitting on my lap in a few of them coming down the long "tube slide", but he later went down that slide several times all by himself, squealing with glee the whole way. He really has no fear (probably because he doesn't know he should yet).
And I swear Angie was at the playground too, but when you let her pick her favorite pictures to put on the site, she somehow mysteriously goes missing from all of them. Here are a couple more: 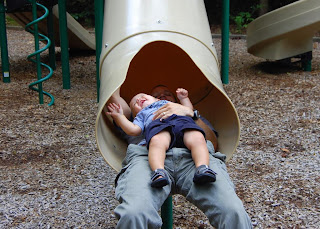 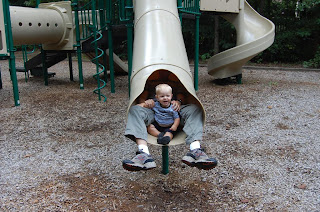 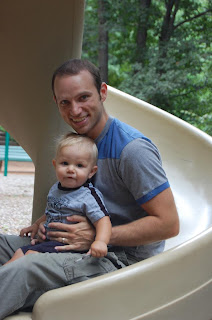 Beach Pictures are Up 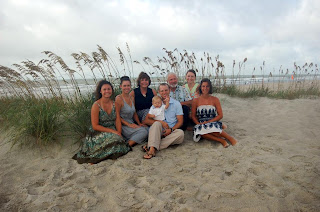 Like I mentioned in the previous post, we spent all last week at the beach with the Suskays. They've been going to the same beach for 17 years now (thanks Mandie) which is pretty cool. This year had a couple big events paired with it that made it extra special. First, Patrick's Aunt Mollie turned 21 while we were there which was very fun. Mollie's been a huge help to us while she's been home from school for the summer. She's been able to watch Patrick a bunch especially in the last month or two while Angie was finishing all her tests and applications for her new job. Mollie's one of the most selfless people I know, so it was nice to see her get a day that was all about her and for the whole family to be able to celebrate it.
Of course, the second thing that was different this year from years past was that Patrick was there. And holy crap does he love the beach. Patrick has been to the beach once before and we were hoping he'd still enjoy it as much as he did 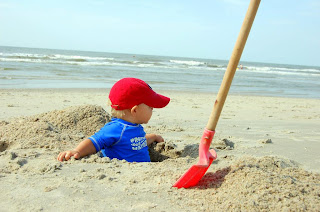 that time. We were not let down. He loved every part of it. The sand, the wind, the water, the birds ...especially the birds. If he grows up to be a bird watcher after this trip, I can't say we'll be surprised. Every time a bird flew by he had to stop everything he was doing, point, say/yell "bird" and make sure everyone else was aware of the bird's presence. We took Cheerios out one day and threw them in the air to attract the birds and I thought Patrick might explode with excitement. We had about a dozen birds no more than ten feet above our heads (13 feet above Patrick's - for all you detail oriented readers).
Patrick also had some great bonding time with Angie's side of the family. 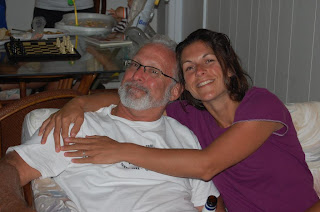 It was awesome to have his Aunt Mandie in from Idaho who keeps up with him mostly through emails, phone calls and this site. And Aunt Mandie knows how to make friends quick - she brought Patrick's birthday present with her. She and her husband Tim got him a fire truck that he can ride on or push that plays more songs and makes more sounds than I know what to do with. It even has a spinning red light on the front. Patrick must have thought this was a "beach toy" because when he saw it back at our house he squealed with surprised delight and has been playing with it ever since. 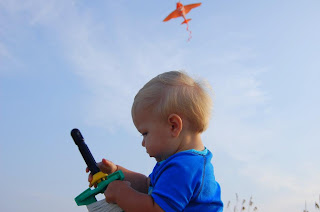 Patrick also became very close with his Meme and Papa. Papa taught him how to wash windows and every morning they'd go out on the deck and wash all the salt off the windows so we had a clear view of the ocean from inside. To me, it doesn't sound all that fun, but to Patrick it was a new game he got to share with his Papa. His Papa Joe also let him fly his first kite. Patrick picked out the clown fish kite in keeping with the beach theme and got to take it for a spin on the beach. He later found the Tigger kite and although it was too windy to fly, it had to be put up in the living room so Patrick could growl at it every time he walked by.
There's a ton more to write about but - like Patrick having his first crush (he misses you Betsy :) ), sliding down the sand slide, going for a wagon ride to the pier, learning where the moon is, etc. - but, as usual, I've probably gone on too long already. I'll let the pictures and their captions tell the rest of the week. Here are a few more of our favorites followed by the slideshow of all of them (or, you can click here to see them all at once). 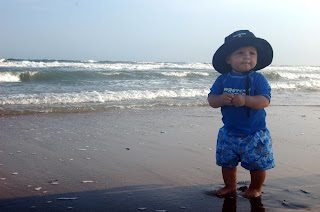 Looking at us and signing for "more waves" 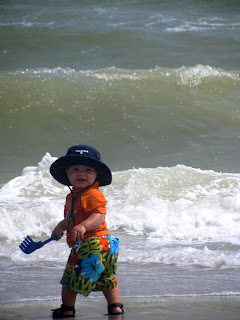 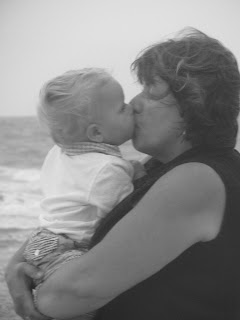 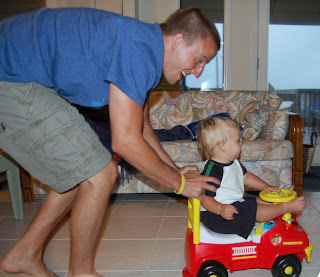 Back From the Beach 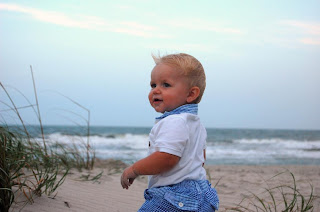 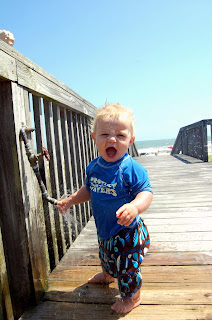 In other big news, Angie starts her new job tomorrow! She'll be working in cancer research but at a different hospital now. She's excited to get started and only fearing the commute. She'll be doing two days a week in the new position which also means that Patrick will start his first day of "school" tomorrow. We visited his classroom with him before we went on vacation and he loved it. It's all new toys and things to climb on; how could he not? Seeing him run around the room and play and giggle while we talked to the day care's director successfully allayed some of our worries. He'll be going both Monday and Tuesday so we'll be sure to take some first-day-of-school pictures and update with how it went.
Thanks again to the Suskays for a wonderful week at the beach. We really appreciate the effort it takes to coordinate a trip like that and especially all the attention and care given to Patrick.
Posted by Toby at 8/02/2009 1 comments