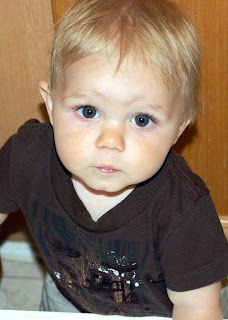 Patrick's been doing a lot of chatting lately. It's very cool to see him start to make the connection between language and the rest of the world. His favorite word, by far, is "dog." He can accurately recognize a dog and, once spotted, continues to say "dah" for as long as it takes before he gets distracted by something else. He'll also say "woof" if you ask him what the dog says. He's been making the sound of a car for awhile now but he's gotten better at using it specifically for cars. If you put three toys in front of him and ask him which one is the car, he'll pick the right one and start making his car sound. He's also trying to say "banana" and "ball" a lot lately (which sound about the same when he says it but definitely knows what each one is).

The odd thing is, as good as he's getting at recognizing objects and linking them with their names, he still refuses to call Angie anything other than Dada. 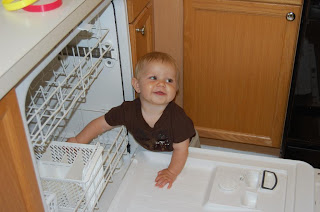 We say Mama and Dada more times per day than probably any other words he hears and for some reason it just doesn't click. It's really amazing how bad he is at it. We'll get done running through all the different things he can name and what sounds they make and his sign language and "where's Daddy's nose" (which is an easy game; he's got a huge target) and right as I'm about to start calling colleges to see if they accept 10-month-olds Angie walks in the room and he excidetly yells "Dada!" Obviously, he won't call her Dada the rest of his life, but it's just funny to us.

Patrick also took his first few steps the other day (as you may have seen posted on the Twitter feed on the right-hand side of the site). He was standing all by himself after I let go of his hands and then took three solid steps to Angie. He's 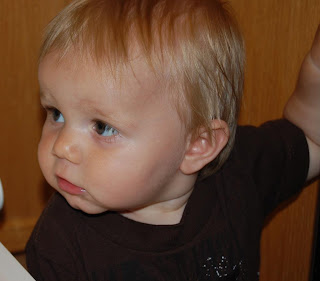 taken several more since then kind of randomly. We were just glad that we were both with him to see his first steps.

Oh yea, remember a couple weeks ago when I promised some beach videos within the week? Guess what; I lied! But, I've got a video of it now. It's a couple minutes of some of the more fun moments. It's split into four sections:

1. Patrick making the half-mile crawl for the beach. The funniest part to me is the tracks he leaves (he rarely let his knees touch the ground). Luckily he's not being hunted. Kid wouldn't stand a chance.
2. Me carrying Patrick to the beach after he gave up. I love the "excited hands."
3. Patrick trying to fall asleep in the sand because it was WAY past nap time.
4. Uncle Jonathan explaining the nature of cranes as one walked through the yard. My favorite part, other than Jonathan's impression, is my Dad's face afterwards.

To Our Wonderful Mothers...

We are blessed to be able to spend today with both of our mothers and families. We have two incredible mothers who are even more incredible grandmothers! I think this song says it better than I ever could...

Home Is Where You Are 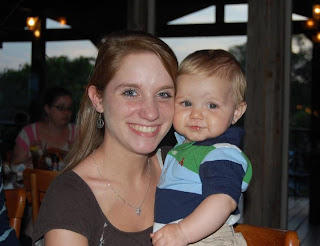 We weren't allowed to say much about this before we went because it was kind of a surprise, but we spent this last weekend in Hilton Head. It was a surprise gift to our Dad for his birthday. I won't say exactly how old he turned, but let's just say it was a big one. He basically turned 30 twice (did that give it away?). So, the whole family (all 10 of us now) headed to Hilton Head on Thursday of last week for a long, relaxing weekend.

There were a lot of firsts for Patrick on this trip. For starters, it was the longest car ride he's been on - a little over five hours. He did awesome both going there and coming back. We kept him up as long as we could and delayed his morning 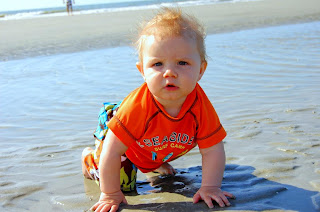 nap by a bit, then when he was super tired, we fed him and jumped in the car. He slept for the first two hours of the car ride on the way there and two and a half hours on the way back (he probably would have gone longer but we had to stop because I apparently drank a little too much energy drink and coffee in preparation for the drive). Both times, he entertained himself for a bit once he woke up and then Ang jumped in the back with him and read books and played. He only got fussy one time in both drives!

The whole crew stayed in a great villa that belongs to the Wise family that was across the street from the beach. It was the perfect place to stay. Thanks again to Marc and Sarah for 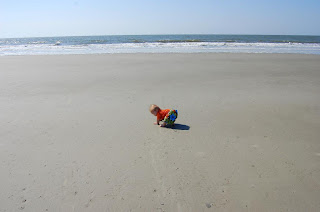 letting us crash there for the weekend. Ang and I arrived a little before everyone else so we thought we'd take Patrick to the beach to get him acclimated. We figured he might need a little "getting used to things" time with all the wind and the loud waves and the new textures of sand and so on. We were very wrong. We brought him to the beach and he immediately wanted to get down and check out the sand. Once he hit the sand he noticed the waves and headed straight for them. Even after he got to the water he didn't stop crawling; he just squealed and giggled and crawled in deeper. He has no fear.

The rest of the weekend was spent relaxing at the beach and the pool. We've also decided that we need to get a little plastic red wagon for Patrick. Since 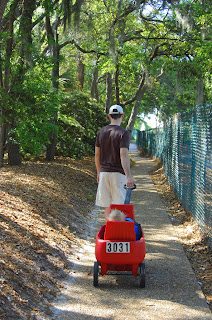 Marc and Sarah have kids, the villa was very kid friendly (crib, baby monitors, safety latches for cabinets - you name it) and that meant there was a little red wagon. Every day when we went to the beach we'd load up the wagon with Patrick on one side and all his toys and towels on the other side and wheel him around. He LOVED riding in it. We'd also take him along on our walks on the beach in the red wagon and it turned into more of a baby parade than a walk. The entire time we walked up and down the beach people would wave to him and say hi and he'd give them a big chubby smile and wave back. He was thrilled to have so many beach friends.

There's no shortage of pictures and video from the trip so we've posted a slide show below and we'll get some video up over the next week. Thanks again to Katie and Brandon for setting up the stay for the weekend and to the whole family for taking Patrick wherever he pointed the whole weekend. He loved getting to spend some quality time with everybody. 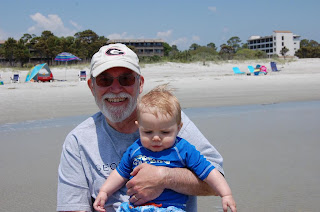 And to Dad: happy birthday. I can't tell you how excited we were to get to spend the whole weekend with you. The more time I spend being a father and navigating the daily decisions and nuances of raising a child, the more I realize what an amazing Dad you really are. No beach trip or gift can tell you how much I appreciate you being such an amazing role model to me in fatherhood and life in general.