Our Halloween lasted several days this year. It started Friday morning with a party at Patrick and Madelyn's school. They had a "trunk or treat" followed by a party in the classrooms. I was working but Papa was able to go with Angie and the kids and join in on the fun. Patrick had a fun time showing Papa around his school and seeing all his friends dressed up. Madelyn had a great time getting to play in the "big kids" room with Mommy and Patrick. Here's a slideshow:

Saturday we went to the Woodstock Square for a Halloween Kids Fest. However, an overly tired, overly hungry and slightly overwhelmed by the large crowd two-year-old made for not the most enjoyable trip. So, we won't spend any time on that here. 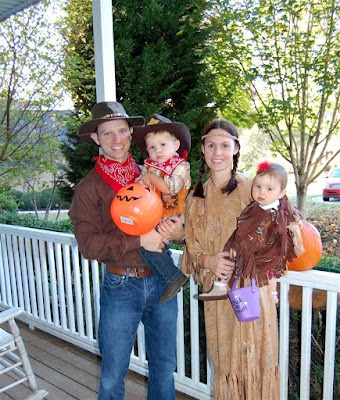 Sunday was awesome though. This Halloween was one of those days that reminds Angie and me just how lucky we are and how great our families and kids are. Both sets of Grandparents came over to see the kids go trick or treating as well as Aunt Abbie and Uncle Matt. Patrick was beside himself with excitement from the second they all walked in the door. It was actually difficult to get him in his costume because he couldn't stop wiggling and moving around trying to talk to everyone and tell them about what was going to happen.

Speaking of costumes, we really had good ones this year for the kids. When Patrick was born, his Aunt Mandie and Uncle Tim gave him a pair of chaps and a cowboy vest with a sheriff's star on it that says "Idaho." Patrick is finally big enough to wear it so that pretty much decided what he was going to be this year. Even with his costume decided months in advance, Patrick had several ideas of his own for what he should be. He had dozens over the last few months, but here are the top 5 he kept coming back to:

5. A Mosquito
4. A family of pygmy marmosets
3. A Howler Monkey
2. Parasauralophus
1. A Bench 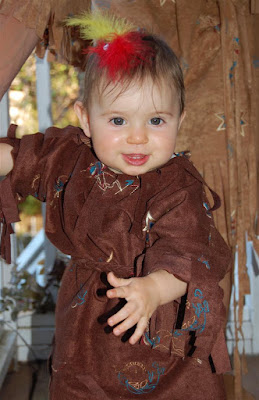 The bench was his favorite choice. Angie and I kept trying to steer him towards other costume ideas but he continually came back to the bench. Luckily, once he tried on his cowboy boots and learned a few key cowboy phrases ("Rope and ride!", "Saddle up partner!", "Come along little doggies!" and "There's a snake in my boots!") he forgot about being a bench and set his sites on riding into the sunset. Since Patrick was a cowboy, I went as a cowboy too. That basically meant dressing in a pair of jeans and a brown button-up shirt that I wear to work and putting on a cowboy hat borrowed from Papa. Business-casual + hat + scarf = cowboy. Who knew it was that easy?

Madelyn and Angie both went as Indian Princesses. I don't really know what the difference between and Indian and an Indian Princess is but I went with it. Both of their costumes were made by Meme and looked great. Angie's was actually one Meme made for Abbie for a past Halloween. Madelyn's was made just for her and she looked adorable in it. We put a few feathers in a barrette for her to top it off.

The kids loved trick or treating. Like, really loved it. The amazing grandmothers stayed back at our house to hand out candy so Angie and I could both go door to door with the kids. And Aunt Abbie brought her camera - since ours took an unfortunate spill off the office desk and broke the lens (spill=Madelyn pulling it over) - and took all the pictures for the night. We are very spoiled. It was wonderful being able to just focus on the kids and spend as much time as we wanted letting them wander the neighborhood knowing that our candy-distributing duties were covered by Grandma and Meme and our memories were being captured by Aunt Abbie. 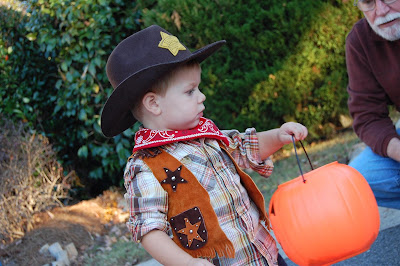 Patrick went house to house filling up his pumpkin with goodies and usually asking for candy for Madelyn too - he's very clever. The kids also made some good friends. A little girl walked by Patrick and remarked "hey there cowboy!" in a very...mature way, to her mother's surprise. Madelyn tried to make friends with the alien baby sitting in a highchair at one of the houses by chatting him up. Then she realized he had a bowl of popcorn and wanted nothing to do with him and everything to do with the popcorn (pictures in the slideshow). And, Patrick tried to make friends with a man "fixing" the ride on lawn mower at the same house. Despite yelling under the lawn mower and even tapping the man's legs, the top half of him never came out from under.

It was a great time. The only thing that would have made it better if the original plan of having Aunt Katie, Uncle Brandon and Carson come over had worked out. Unfortunately, Carson came down with a cough the night before. We missed you guys a ton though and can't wait to try again next year! Thank you again to the grandparents and Abbie and Matt for making the day so memorable and fun. Thanks to Meme and the Garitys for the kids' costumes and to Aunt Abbie for taking so many awesome pictures. Here's a slideshow of the fun or you can see the gallery here:

Those pictures are a-maz-ing! You guys all look fantastic. Must have been heaven for such a social guy like Patrick--what an event! And I'm going to go into withdrawal if I don't get to kiss Maddy's cheeks soon! So sorry we missed it-- already looking forward to next year!

Love, love, love the pictures. I am at work and people keep looking at me because I burst out laughing or saying ohhhhh!!! So, I just shared the pictures with a few people. One proud Aunt and Great Aunt!!
You all look fabulous! How neat that everyone dressed up! Another great sewing project by Pam!
Love, Jill

I can not believe how cue of a family you all are!!! That was a great idea for Halloween, you guys look like professionals. As always the kids are so adorable and I can not tell you that I come to your blog if I have a bad day and it always puts a smile on my face!! Love you all very much!