In Patrick’s short life he’s already proven to be partial to smart, talented, attractive women. Below is a list of his top five crushes in the order they occurred: 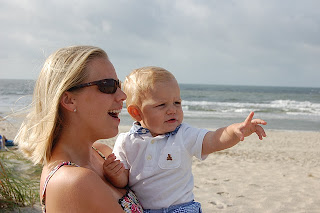 Name: Betsy E. Bowers
Occupation: Paramedic
How it began: She bribed him with candy the day after he was born, rides on an ambulance every day for work and even gets to sleep at a fire station sometimes.

Where it Began Hello, she’s INDIA ARIE. We have this song clip DVR’d and he would request to see it at least once a day from 10 months old to somewhere around a 1 ½ years old. At first I thought he liked it because of Elmo but then I noticed every time Elmo would sing Patrick would furrow his eyebrows and shake his head. Quiet Elmo, he wants to hear India! 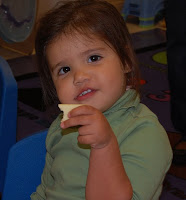 Name: Sophia (last name unknown)
Occupation: Friend. First friend when Patrick started school two days a week at 12 months old, to be exact.
Where it Began: Phia, as Patrick affectionately calls her, smiles and giggles whenever Patrick talks to her. They remain close to this day and enjoy playing on the playground and exploring in the toy kitchen together.

Name: Alicia Márquez
Occupation: Diego’s older sister, animal scientist (in training) and dinosaur expert.
Where it Began: She’s the first girl he’s ever “met” that loves dinosaurs as much as he does. Alicia and her brother introduced Patrick to some of his most favorite animals- pumas, pygmy marmosets, sloths, coatis, etc. The fact that she has a jeep, submarine, kayak, snowmobile and other things of the like doesn’t hurt either ;) 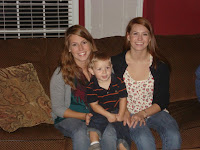 Name: Chelsea Hopkins (pictured here on left)
Occupation: Student at UGA
Where it Began: Now, I wasn’t at Thanksgiving dinner to witness the event but I was told by a reliable (kind of) source that Patrick was totally smitten with Toby’s cousin, Chelsea. He followed her around, gave her goofy grins and even faked having his leg stuck in the sofa so she could rescue him! The kid's smooth.
Posted by Angie at 12/07/2010

This is so funny--but so true I have seen how he tips his head and acts shy when Betsy is around---wish I could have seen him trying to impress Chelsea!!!!

So glad to know early-on that he has good taste! This is so cute.