Another witty title. My creative juices must be in overdrive today. Anyway: Happy Easter! We hope everybody had a great weekend with friends and family and rabbits.
First things first, I'd like to draw your attention to the prettiest little Easter girl I think I've ever seen... 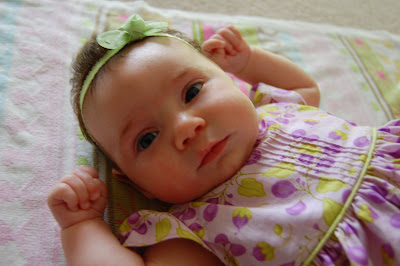 I know, it's just outright parental bragging at this point but I think she's beautiful. When people found out we were having a little girl I was repeatedly warned that "there's just something about little girls" that would tug at my Daddy heart strings. It wasn't that I didn't believe all the people that told me this; I just didn't know how right they were. Something about seeing Madelyn in her little Easter dresses last weekend made me want to immediately go out and buy her a castle with a pony. And a rainbow. With a unicorn. All made of chocolate and magic. 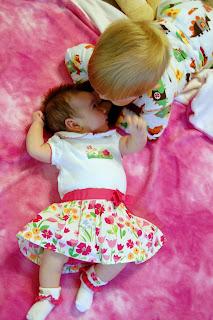 Good Friday, I was off work and Patrick's school was closed so we all got to spend the whole day together. It was great. It was a much needed day of family time and getting-things-done-around-the-house time. Because of church Sunday morning, Patrick's nap and going to my family's house that afternoon, we ended up doing our Easter Morning on Saturday. Luckily, the Easter Bunny was able to modify his schedule to come by our house earlier than usual. Patrick's still too young to know why any of this is happening but he was pretty psyched to get a basket of toys when he woke up and then continually find eggs filled with snacks laying around our house. It was also a good practice run for the Easter Egg hunt at Meme and Papa's later that day. Madelyn slept through most of the morning events but Patrick made sure to show her what was inside every egg he had found when she woke up. 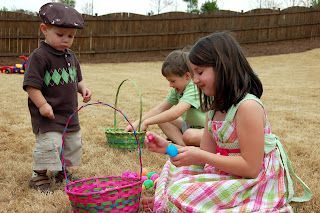 When we got to Meme and Papa's house, Patrick was spoiled even more by goodies. We also got to hang out with Michelle and Rob and their wonderful kids Allie and Koty who came in from Tennessee. Patrick and Allie hit it off right away and Patrick spent much of the afternoon following Allie around wondering what she was doing and wanting her to play with him. It was really cute and Allie was a great sport. After we ate, we went outside and looked for Easter eggs. All the eggs were marked with a letter for each kid's name and filled with all kinds of fun stuff. Patrick was definitely a little more ready to look for the eggs after having his practice round in the morning. 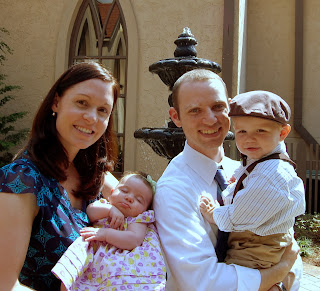 In the past, Angie has taken Patrick to the same mass I'm playing drums for on Sunday mornings. But this was the first time both kids would be coming and it was Easter which meant everyone has to wear seventeen other pieces of clothing they wouldn't normally wear. So rather than have Angie get both kids up, fed, dressed and to church by 7:45 AM with me, we decided to just have the family go to a later mass. I went on my own to play drums at the 8:30 mass and Ang came with the kids for the 10:30 mass. The great thing about this was that I got to actually sit with Angie and the kids for church and participate with them. It was a great way to spend Madelyn's first trip to church and a great way to celebrate Easter together. After mass, we took a few pictures by the church fountain then headed home for Patrick's nap time. 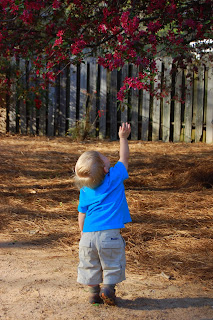 Later that afternoon, we packed up and headed over to Grandpa and Grandma's house for even more Patrick and Madelyn spoiling and a lot of great food. We spent a bunch of time playing outside, throwing the Frisbee for Lily - who I think Patrick is amazed by because she's the only living thing he knows of that might have more energy than him - and getting to hang out with family. Patrick was really excited to see everybody when we got there, especially his Uncle Jonathan. I wish I had a video camera when Patrick saw Jonathan for the first time that day. He was literally speechless and couldn't stop fidgeting with excitement. We often play a game where we say "What do you think so-and-so is doing?" and let Patrick come up with whatever it is they're doing. So we'll ask "Patrick, what do you think Grandma's doing right now" and he'll say "Cooking!" or something like that. But every time we say "What do you think Uncle Jonathan is doing right now" he just gets a big goofy grin and says "Silly!" Patrick was also very happy to see his cousin Carson. Every time he saw her he would squeal with delight and kept trying to rub his nose against her face and hug her. And we can't blame him, she's really cute. 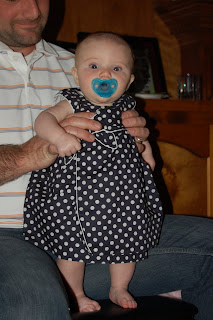 All in all, a wonderful Easter. It's hard to believe that just a year ago Katie and Brandon told us they were expecting a baby and we didn't even know Madelyn would be here. A lot has changed since last Easter and we really couldn't be happier.

Here are a few more of our favorite pictures and a slideshow of even more. 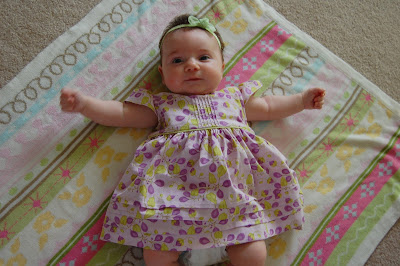 Madelyn modeling the dress Meme made for her 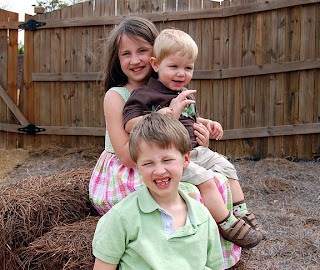 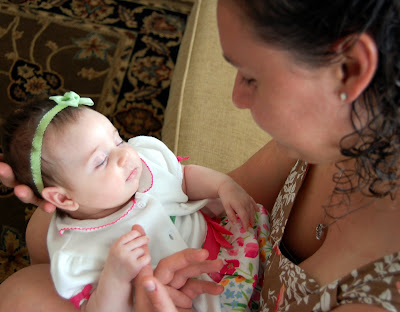 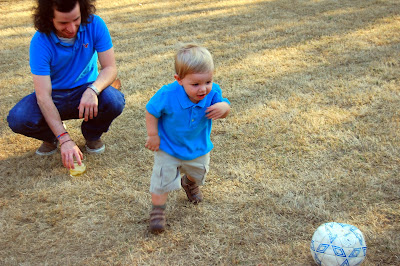 SUCH WONDERFUL PICTURES OF WONDERFUL MEMORIES. SO GREAT THAT YOU ARE CAPTUING THESE TIMES THAT SEEM TO FLY BY. WHAT A WONDERFUL FAMILY YOU FOUR MAKE!!!

I really think Madelyn looks a lot like her Aunt Mollie! Beautful pictures and memories!

To be perfectly honest, I was just as excited to see him.