Don't worry, we're not suddenly under the delusion that people come to this site to read about politics/news (which is good because I’d really rather not write about them). In fact, I'm pretty sure 90% of the visitors to this site don't even know there are words on the page and come here strictly to look at pictures and videos. So, I've sprinkled a few pictures around this post to make it palatable for those folks :) But, I just want to say one more thing about the election and its relation to Patrick before returning you to your regularly scheduled programming. 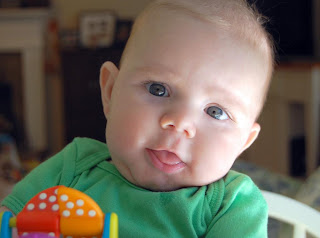 almost lost all meaning, which is sad because it's both an accurate statement and a powerful one. Since having Patrick, everything Angie and I do is seen through his eyes and every event that happens is passed through the "how does this affect Patrick" filter. So, it's pretty natural that something like an election gets heavy consideration in our house as to how it will impact his life both now and down the road.

There are myriad ways this election can and will make a difference to the future that Patrick has to live and survive in, but one of the most unique ways (we think) is that he will never know a time where there wasn't a non-white president. In the same way it seems silly and archaic to us now that there was once a time when women couldn't vote or blacks weren't allowed to have a say in the future of their country, Patrick will grow up thinking how silly and archaic it is that there was a time when being black might mean you couldn't become the president. And that makes me happy. I look forward to the day when he's a teenager and we tell him the story of this 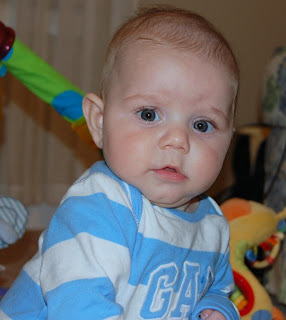 election and how many people thought it was impossible for Obama to become president because he had a "funny name" and the color of his skin was different than all the presidents before him and Patrick laughs at us (as any teenager with a healthy disrespect for his out-of-touch parents would do) and says "Are you serious? You guys were dumb."

Regardless of what anyone feels about the candidates, this is a huge sign of progress for our country (just as electing a female VP would have been). It's progress we should all be proud of. There was a very moving section of Obama's acceptance speech that made me think about the possibilities that are before us and I'd like to post it here. He had just gone through all the major historical events that had taken place in Ann Nixon Cooper’s lifetime. Ann Nixon Cooper is a 106 year old Atlanta resident. And after recounting many of the impressive historical events Ms. Nixon has been witness to during her long life, he ended it with this challenge to all of us:

And this year, in this election, she touched her finger to a screen, and cast her vote, because after 106 years in America, through the best of times and the darkest of hours, she knows how America can change.

America, we have come so far. We have seen so much. But there is so much more to do. So tonight, let us ask ourselves -- if our children should live to see the next century; if my daughters should be so lucky to live as long as Ann Nixon Cooper, what change will they see? What progress will we have made?

I don't think anyone could argue with that sentiment.
Ok. Enough of that. Here's one last picture for the day that Ang took with her phone. I wish we would have had the real camera close to us because it's one of the few where he's actually looking at the camera and smiling. 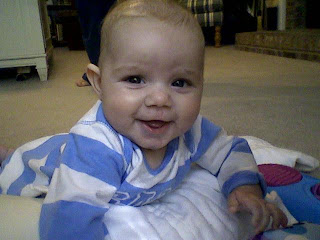 He's started rolling over back-to-front (he's been doing front-to-back for a couple months) almost nonstop this last week. I've been trying to get a video of it that doesn't end in him looking at the camera and spitting up but haven't had much luck yet. I'll be sure to post the video when I get it. Also, Patrick is getting baptized this Sunday so we'll have pictures from that up early next week. Aaaaand, we got some professional pictures taken that we'll be posting here too. Good stuff a'comin.

Hope everyone has a great weekend!

Email ThisBlogThis!Share to TwitterShare to FacebookShare to Pinterest
Labels: Election08

So many folks in their 50s, 60s, 70's + coming out to vote for the first time (and NOT just African American) because they felt moved to do so. That's incredible.

I'll leave those of us under 40 with a good quote:

"Athos: [to Phillipe] Once I, once all of us, believed in serving something greater than ourselves. Aramis had his faith, Porthos his lust for life, D'Artagnan his devotion and I had Raoul. But we all had a common dream. That one day we would finally be able to serve a king who was worthy of the throne. It is what we dreamt, what we bled for, and what we have waited a lifetime to see."

And you wonder why I call you Chatty.

My comment at the moment is if I don't show up for the baptism and/or reception.........it's because I am, once again, lost somewhere in Georgia looking for anything that looks sorta kinda familiar. Paula

AND ... continuing pundit reactions like this only continue to support my theory that we're not all imagining the groundswell (and, more specifically, that it's not just minorities or young idealists):

I couldn't agree with you more. Daniel and I said the same thing about our daughter. She will never know a time when we didn't have a non-white president. Regardless of how one feels politically, that is a big deal. For a country that has dealt with the issue of race so painfully and publicly, this is a big deal.

I don't even need to say how elated I feel for myself and my children.