Wow, it's almost been a full month since we updated the blog*. So...Christmas. We're all still thinking about that, right? Good! Then let's dive in... 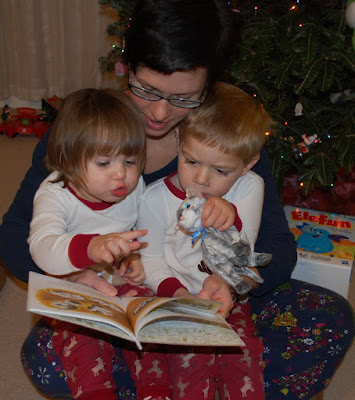 Christmas this year seemed like it would never end. Usually when events are described that way it's a bad thing. Like, a headache that would never end or a bad song that wouldn't end or examples of an easy concept that wouldn't end (I get the hint). A Christmas that doesn't end is pretty awesome though. The kids were surprised and elated every time we said we were going somewhere else to give and get more presents. We also managed to make it through this Christmas without a single person vomiting; which, if you're a regular on this blog, know that's not always the case.

Christmas started out with a weekend at the cabin. Aunt Mollie and Uncle Drew are living it up in Colorado, but everyone else was able to be there which was super fun. Patrick and Madelyn loved getting to spend time with the family and especially loved playing with cousin Creighton. Any time they weren't sure what toys to play with or just had a bunch of energy, they would simply run from room to room yelling and chasing each other then fall on the floor laughing. They thought it was hilarious and it was pretty hard for the rest of us to disagree. There were also several sets of matching pajamas for the cousins going on thanks to Aunt Mandie and Angie. 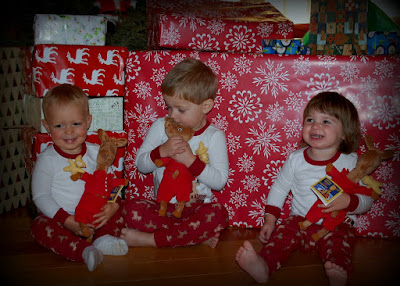 One of the big presents for the grandkids was something called The Summit. It's basically a little rock climbing wall with a trampoline-material level in the middle. Papa said that on the assembly instructions video it took two guys about twenty minutes to put the whole thing together. In real life, it took four of us the better part of an hour and a few adult beverages to complete the assembly. In the end though, the kids went nuts for it and it was all worth it. Despite the cold weather, they spent most of the afternoon climbing up and down and up and down and up and down...


Christmas continued on actual Christmas morning. After we all went to 6:30 Christmas Eve mass together, I played for 9 PM mass which meant that I didn't get home till almost 11 (which is amazingly what time Patrick finally went to bed - but we'll save that story for a future post). 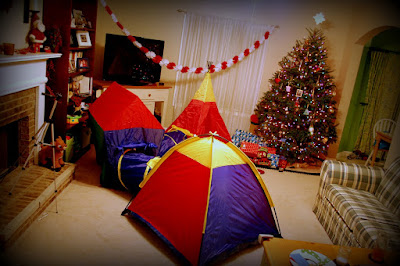 That also meant that we didn't get done setting up for Christmas till almost 1 in the morning. Angie had found a bunch of Christmas decorations we put up to add to the fun. We also had a train set that we put together to go around the Christmas tree that played Christmas music. The big gift for the kids this year was a fort-with-tunnels kind of thing. It's basically a tent, a teepee and a little house that have tunnels going in between each to crawl around in. It's also basically the size of any room in our house; something Santa didn't realize until it was setup. The thing is seriously huge though and is pretty much the whole reason we spent the next few days transforming our dining room into a play room. It's size definitely made for a fun Christmas morning though when the kids first walked in the room. I think it took them a few minutes to realize what it was and that they could go in it to play. Most of the rest of the morning was spent inside either the tent or the teepee playing with toys they got or reading books. We finally had to drag them out when it was nap time. 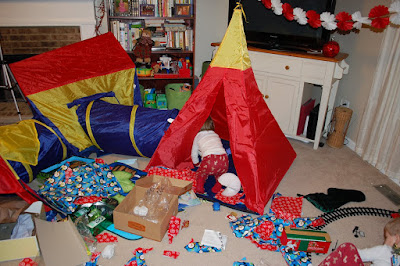 In the afternoon, we went over to Grandma and Grandpa's house for presents and dinner and fun. My Aunt Ellie, Uncle David and their girls came over too which is always a treat for the kids. You may remember that Patrick is a pretty big fan of Chelsea. Dinner was amazing, as always, and everyone had fun wearing their "Christmas Crowns" and reading the terribly bad jokes that come with them. Patrick got a remote controlled car that he thinks is the fastest car in the world. While it's not exactly how I thought the car would be played with, one of the kids' favorite things to do is chase it around the cul-de-sac while I drive it (this Dad gig is pretty rough sometimes). Like this:


And Maddy finally got the umbrella and rain boots she's been wanting so she can splash in the puddles with her big brother :) Of course, when it's not raining she just walks around with it open inside (great idea) and sings "Let's Go Fly a Kite" over and over. I know I should tell her not to but it's really cute and so far hasn't broken anything, so we let it slide. 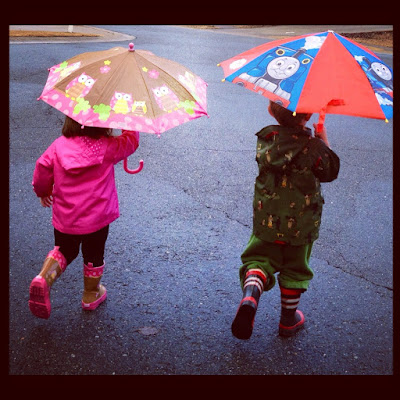 We also spent some Christmas time with the Barkers. Our kids love playing with Andrew and Jordan and can never get enough of their Uncle John and Aunt Wendy. Other than the running and playing and laughing and Patrick learning more about Star Wars characters from Andrew than any adult I know could teach him, the highlight was making dessert. Angie had made individual car cakes for the kids and then got a bunch of decorating candies and icing. All four kids went to town on decorating their cars. I think they actually had more fun decorating them than they did eating them, which is saying something. Here's  a picture of the messy fun... 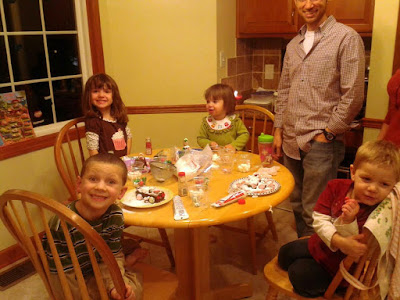 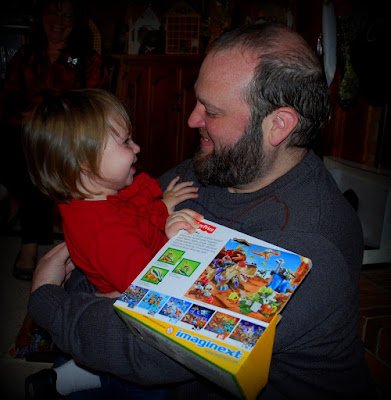 And as if all that wasn't enough Christmas, we had one final day. The Beans were out of town on Christmas day so we got back together on New Years Day to celebrate "sibling Christmas." Our favorite part was watching the cousins play together with their new toys and a game of "pin the nose on the reindeer" for the kids. As an added bonus, we got to take Carson home with us for our first cousin spend-the-night! We'll have another post with pictures and stories from that event but, needless to say, it was a great way to end the Christmas celebrations! 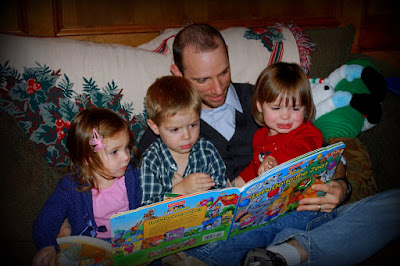 Here's a slideshow of all the fun or you can check out the whole gallery here.


*Blog Note:
Even though it's been a long time since our last post, we're going to try to post more frequently and about more varied topics. With all the events and get-togethers we have, the blog, at least for us (so we can only imagine for you too), can turn into just a list of things we've done. We want to make sure to keep capturing events like Christmas and birthdays and everything else but we also want to make sure to capture the experience of parenting and living life with Patrick and Maddy right now. We don't want the whole blog to be "here's what we did last weekend" for every post. So, we're going to try to start posting about parenting in general, life with two, specific challenges we've faced and even some things that aren't directly about the kids but more about our lives with kids. Hopefully this will make the blog more fun to read and more fun to write. I know some readers have gotten in a habit of checking every Wednesday morning (we apparently got ourselves into an accidental schedule of posting on Tuesdays a while back) so I wanted to give you a heads up to check back more frequently. I know for certain there's a week coming up where there will be a new post every day.
Posted by Toby at 1/16/2012

Oh what wonderful times and memories--thanks again for capturing it all. I love each Christmas to go back and read all the Christmas blogs. How grateful and blessed we are!

It looks like everyone had a great Christmas! So awesome to see what the kids got and to see everyone with a smile on their face. Drew and I miss all of you very much! Thank you so much for putting up pictures so we can see what we missed.