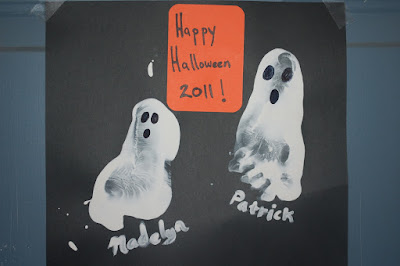 It's probably hard to guess what this post will be about with a vague and ambiguous title like that. If you missed it, we're talkin' Halloween. Halloween 2011 to be exact.

This year's Halloween was super fun. We spent almost two hours trick-or-treating with the kids and it flew by like it was only five minutes. I think Angie and I were more upset than the kids were when it was finally time to go in. Costumes this year were really fun because Madelyn is old enough to wear a real costume and get excited about it and Patrick has all kinds of ideas about what he wanted to be (luckily, none were as crazy as last year's ideas).

We had actually gotten Patrick a couple costumes this year because Angie spotted some awesome dinosaur costumes at consignment for $5 and couldn't pass 'em up. We figured, if nothing else, Patrick can just use them as fun everyday dress up clothes for playing around the house. He was excited about them and does use them when he's pretending he's a dinosaur sometimes but he wasn't sold on them being his Halloween costume. For his real costume, he kept asking to be a rocket ship and we kept hoping he meant an astronaut since we had never even seen a rocket ship costume before. But lo and behold, one day while wandering the aisles of Target with the kids, Patrick's head almost exploded as he spotted a rocket ship costume. The search was over. The costume was decided.

Patrick spent the rest of the night blasting off from house to house and looking up longingly at the moon.

For Madelyn, we had lots of ideas but as soon as we thought of Wonder Woman we couldn't picture her as anything else. It just seemed to fit. Lucky for us, she thought so too and loved the costume. She even kept the head band on for a good 3 minutes. 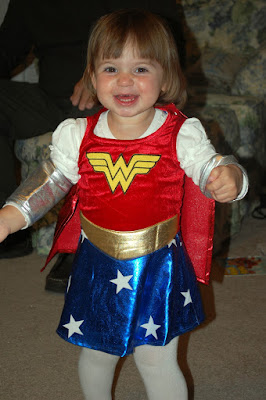 Meme and Papa also stopped by for a bit which was great fun. Patrick and Madelyn loved showing off their costumes and pumpkins and telling them over and over again about how Halloween works...just in case they forgot. Meme and Papa also stayed back at the house handing out candy so Angie and I could both take the kids door to door which was awesome. (Sadly, Grandma and Grandpa were in Florida for a medical conference. Who holds a medical conference on Halloween?!)

Of course, the most fun part of the night was just watching the kids. Our usually shy-at-first Patrick had no problem coming out of his shell and talking to everyone at the door and other kids on the street. 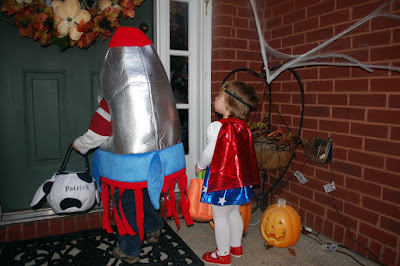 He was excited to see all the decorations in the yards and what costumes all the other kids had on. As for Madelyn, this holiday really was made for her. A night of wandering the neighborhood, meeting and talking to all our neighbors and their kids and every time she smiled somebody gave her candy? That's like heaven to our little social butterfly with a sweet tooth. In fact, if we stood at someone's house too long talking to them, Madelyn would start walking away saying "C'mon! Eeeeaaaat!

Here are a few more of our favorite pictures from the night... 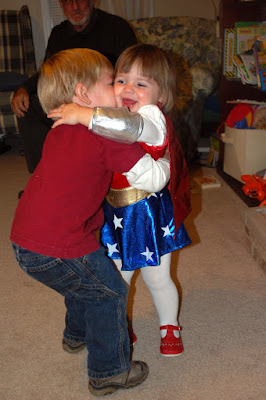 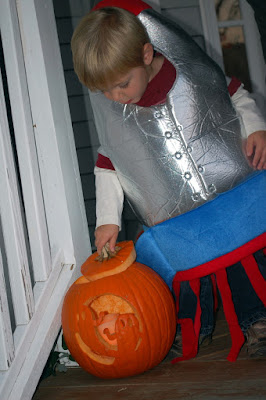 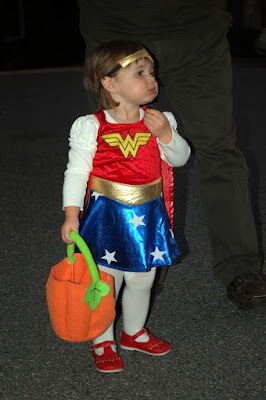 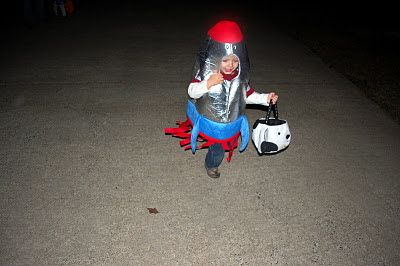 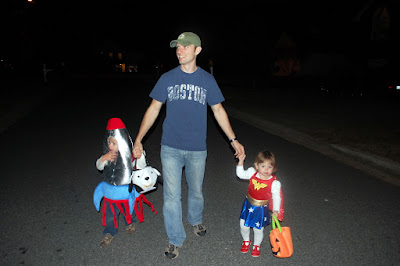 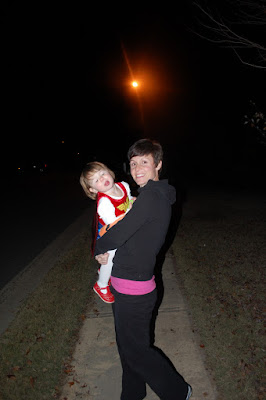 And here's a slideshow with the rest of the pictures since putting a couple dozen directly in the post would probably annoy people. (Full gallery here.)

We loved seeing Maddy and Patrick so excited about their costumes! And thrilled to be a part of it all! Love Meme