This last weekend Meme and Papa got us tickets to the Georgia Aquarium for a much needed distraction from all the hoopla (a word you should try to use in a sentence this week). The last time we went to the aquarium was a year ago almost to the week.We took just Patrick that time since Madelyn was so little and had a great time. It was so cool to be able to go with both kids this year, though. They loved everything about it. 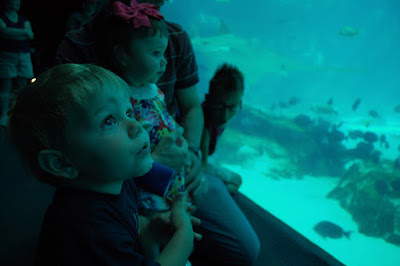 Things that made Patrick a little uneasy last year, like petting stingrays, he (almost literally) jumped right into this year. At one point he reached in a tank, grabbed a star fish by the leg and pulled it out of the tank to show me saying, "Dad! Look at this cool sea star!" Luckily none of the aquarium staff saw this happen so we didn't get kicked out. 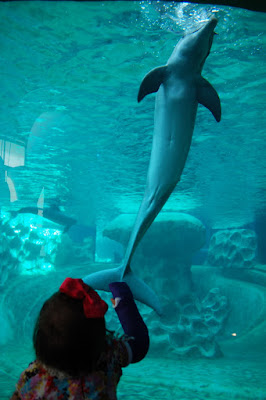 Madelyn couldn't get enough of the huge aquariums and tried to say "hiiii" and wave at every single animal there. When the animals didn't respond she then turned her attention towards other aquarium goers and tried to meet every person by saying "hiiiii", waving and then usually patting them on the back or head. She also found out her cast made kind of a cool noise on some of the tanks so she'd usually hit each tank as we looked at all the animals inside with her cast arm.

We learned last time that because of the lighting and glare from the tank walls and my general lack of photographic talent, most of our pictures from the aquarium turn out pretty terrible. So this time, I took quick videos along the way with my phone. Here's a short video recap of some of our aquarium visit...

Judging by the extremely quiet ride home, I'd say the kids had fun... 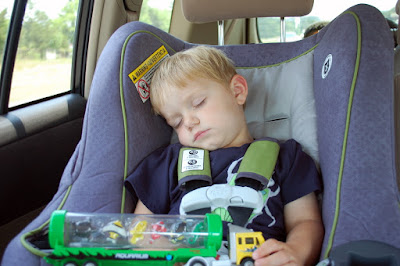 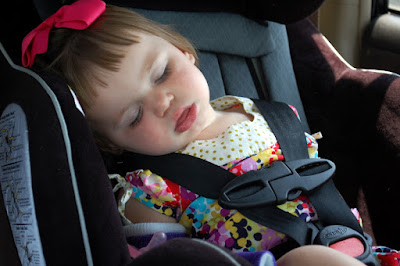 Thanks so much to Meme and Papa for the extremely thoughtful gift. The kids had a wonderful time and Angie and I had a blast watching them enjoy the day. It was the perfect way to take our minds off the hectic week and have some family time.
As for Madelyn, she's still doing great as long as no doctors are trying to cut her cast off or put a new cast on or touch her or stand near her (Don't worry Grandpa, we haven't told her you're a doctor yet. You can still expect plenty of Maddy hugs.). We had a follow-up appointment today that went well and the surgeon decided surgery tomorrow is still a good idea. Her surgery is scheduled for 11:30 but we have to get there at 10 to start the whole process. There are still a couple different options for how the surgery could go once they are able to get a better look at the finger with the stitches out and the tip taken off so we won't know how long it's going to take or exactly what they're going to do until we're in the middle of it. Honestly, I think the part Madelyn is going to hate the most is that she's not allowed to eat or drink anything until after surgery. Madelyn likes to eat or drink something pretty much all the time so her not eating from 6 PM tonight to sometime tomorrow afternoon is going to be extremely difficult. Wish us luck in the waiting room as we try to fill out paperwork and mentally prepare ourselves for what's to come while also trying to calm a very hungry and thirsty 15 month old.
Thank you again to everyone for all the prayers, thoughts and kind words. We'll make sure to update as we know what's happening. If it's not in the main part of the blog, it'll be on the right-hand side.
Posted by Toby at 5/24/2011

Hope things are going well after the surgery.

You have amazing, strong children!

Saying prayers for all.

Cool video editing!
That looks like it was lots of fun--so glad you guys got a break! Carson really enjoyed watching P & M with all the animals :)

Thats so awesome that they have dolphins there now!! SO cool!! They looked liked they loved it and had a great time!!!