Perfect Weekend With a Not-so-Perfect Ending

First things first: congratulations to Matt and Abbie Doran! We had a great time at their wedding last Saturday. The wedding was beautiful. Abbie and Matt looked amazing. The party was super fun. The kids were perfect in their roles of Ring Bearer and Flower Girl. In fact, I'm thinking of hiring them out to other wedding parties. I promise we'll write more about the wedding soon and hopefully we'll have some pictures of the event by then to go with it; but, this post is more to give an update as to what is happening with Madelyn.

Trips to the ER are considered a sort of rite of passage for parents. You hear about it from other parents and you pray it doesn't happen to you, knowing full well that it eventually will. All you can really do is hope it's for something not too terrible or something silly like a quarter stuck in a kid's nose. Well, we had our first trip to the ER this last weekend almost immediately after all the wedding festivities had come to an end. Sadly, it wasn't something silly but, luckily, it also wasn't anything life threatening.

For those who read this blog that haven't heard, Madelyn got her pinky finger shut in a door Sunday night and suffered a "partial amputation." Yep, that's what they call it. That's what we had to write on a bunch of medical forms and say multiple times to doctors when talking about our little baby. Not fun. Basically, the top part of her pinky finger on the palm side tore completely off other than a very small piece of tissue holding it to the rest of her finger. 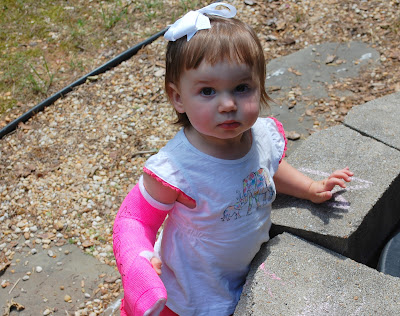 Sunday night Uncle Tim drove Angie and Madelyn to the ER (I was at church at the time but met them there. Tim, I can't thank you enough.). The doctors did what they could and reattached the part of Madelyn's finger that was hanging by a thread with 14 stitches in hopes it would heal and reattach on its own. It was not a good night. I'm going to tell you that if you've never had to hold your screaming child down while someone they don't know does something very painful to them, you are lucky because it is easily 100 times worse than it sounds. Our Madelyn was a champ though and rolled with it as best she could. After they were done stitching her finger tip back on, they bandaged her up, waited for her to "come to" and put a sock on her hand to keep her from picking the bandages off. Maddy did awesome and barely seemed to notice the sock hand. When she woke up the next morning, she almost immediately climbed up Patrick's chair and tried to take his food. She's a tough cookie that little Madelyn.

We had an appointment with a hand specialist yesterday and got some bad news. It looks like the finger tip isn't reattaching as we had hoped. The whole tip of her finger is completely black, in fact. They put a cast on her arm (yes, her entire arm. Apparently it's difficult to make a cast small enough to fit a 15-month-old's hand that they won't wiggle off) and sent us home. We'll go back on Friday for them to evaluate how the finger is doing, but, we're assuming it won't be any better based on how it's been so far. The doctors are really just giving it a chance because there's no rush and she's young.

The three options right now are: 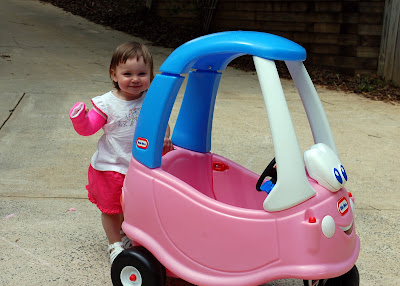 So there you have it. As of right now, Madelyn is doing awesome. She slept surprisingly well last night even with her new clunky cast and is her same old rumble-tumble self. She's in a good mood and is still able to do most of the things she's been doing, even if we'd rather her not (eg: climbing everything in sight - see video below). We know that Friday won't be fun since they'll have to remove the cast to examine her finger and at this point the mere sight of a doctor makes Madelyn cling to us and start screaming. We also know that next week's probable surgery will be even worse. But, this is a temporary problem and if we had to go to the ER, there are a lot worse ways we could have gone. This is nothing life threatening, nothing long term other than a cosmetic issue and some loss of feeling in her pinky. Even of all the fingers she could have damaged, this is the best one. I have two perfectly good pinkies and still wonder why most of the time. They never really seem to do what I want them to anyway. The part that's the hardest about this is just the procedures and how much they bother Madelyn. But, we understand how blessed we are that in the grand scheme of things, this is a very small injury and in a year or two this will be a small bump on the road.

Finally, thank you to everybody that's sent emails, texts or called over the last few days. Thank you to our families for helping out with Patrick while we were in the ER or at the doctors or just needed some time with Madelyn. Thank you to people who brought us dinner. Thank you for all the love and prayers. And Patrick, if you ever read this someday, thank you for being such a patient little boy over the past few days. We've given a lot of extra attention to Madelyn, your schedule as been thrown off track, you've had to be extra careful when playing and you've handled it amazingly well.

We'll continue to keep everybody posted on what's happening as it happens. We'll either update here in the main blog or post smaller updates to the Twitter feed on the right-hand side. I'll leave you with a video of our Madelyn being herself, despite her cast :) ...

Thinking of you all! Love you so much.

Praying for sweet Madelyn! So sorry that you are all having to endure this.

Thinking of you all! What a trooper she is! If Patch needs a playdate, we would be happy to entertain him one day!

Maddy had always been such a strong girl! It is amazing that it seems like nothing will slow her down! Prayers and thoughts are with you all. God bless! Love you all very much!

I've been lifting Madelyn up in my prayers! She is such a joy...just loved watching her dance in the video. Keep those spirits high. Love you guys!