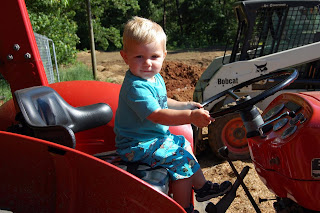 We've had a couple very fun and busy weekends in a row. Two weekends ago was Mother's Day weekend. We headed up to a cabin in Bent Tree with the Suskays and spent Saturday exploring the area. We went to the little beach they have there where Patrick got to play on the playground, run around in the sand and throw rocks into the water in an attempt to make them "bounce." His favorite part was going to the stables though. He got to see a bunch of horses and a couple ponies. He wasn't so sure about petting their noses when they came over but he kept trying to butt heads with them because that's what he thought they were trying to do to him. He was also very intrigued by the barn cat and wanted to know where it was at all times. Right before we left the stables, they let the horses out to run in a group and we got to see them play together. On Sunday, Ang and the kids came back from the cabin and I met them at the house after I played for church in the morning and had brunch with my Mom. We spent a nice relaxing afternoon at home and got Angie's favorite Bruster's ice cream and dinner from her favorite Italian restaurant near us. Also, this picture of Madelyn has nothing to do with Mother's Day but it's cute to me. There are a few more of these in the slideshow at the end of the post :)
Last Saturday, we took Patrick to the Georgia Aquarium. Meme and Papa had given us this gift before Madelyn was born but due to Madelyn's early arrival, we 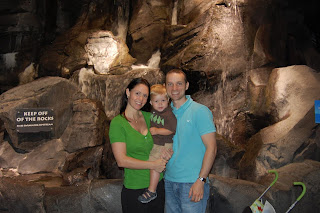 never quite made it. So, they watched Maddy for the morning while we had some one-on-one time with Patrick. He loved every second of the aquarium. We got to see whale sharks, albino alligators, manta rays, sting rays, an octopus and tons more. I don't think Patrick's pointer finger has had that kind of workout since we went to the zoo. He wanted us to see EVERY fish there and was constantly saying "Look Mommy! There's 'nother one over there! WHOAH, big fish over there!" He also wanted all the other aquarium guests to appreciate the sites. There was one tank that had garden eels in with the fish. They basically look like small tubes coming up from the sand. Patrick saw them, got down on his belly to get as close as possible then screamed to everyone around us "Look kids! Worms!" as if he was leading a school tour. His mind was racing the rest of the day with everything he saw. He got to bring home a stuffed Beluga Whale that he hugged the whole ride home and sleeps with every night.
Once we got home from the aquarium it was nap time. After nap, we went to Nora Mayer's second birthday party. Our good friends Mark and Megan moved back to 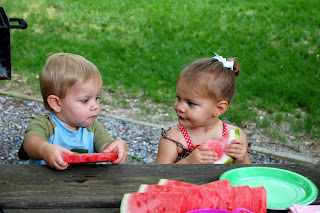 Georgia after spending a few years in Arizona. They too have grown their family by one member recently. Their daughter Audrey is a little over two months older than Madelyn. We're excited to have them back and looking forward to the kids getting to play together. They had just moved in a couple days before Nora turned two so we took the kids to their neighborhood playground to check it out, eat some pizza and cake and play. The kids had a blast running around and playing on the two big playgrounds. It's very cool that Patrick and Nora are only a couple months apart in age and enjoy playing with and doing the same things. And Maddy and Audrey can chill out and coo at each other.
On Sunday, we went to Grandma and Grandpa's house to celebrate my Mom's 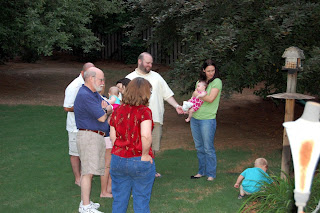 birthday and Mother's Day. Madelyn and Carson got to lay on the floor together and stare at each other and for the first time, I think they both realized the other one was there and started "talking" back and forth. Grandpa made awesome hamburgers and we spent a lot of time running around the back yard. Patrick never gets tired of watching Lily chase a Frisbee. He was also introduced to Grandma's garden and all the spices she is growing. Grandma showed Patrick each one around the yard and he loved pulling a piece off, smelling it then taking it to everyone else to smell. 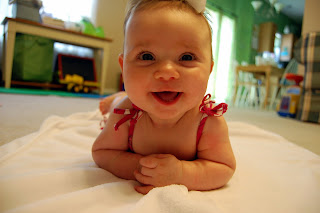 So, that's the last couple weekends of our lives. Madelyn continues to roll over from her tummy to her back and try as hard as she can to go the other way. She smiles and coos constantly and is just starting to figure out the whole laughing thing. Patrick is talking more and more (and more...and more) every day. You can tell he's excited about speaking in full sentences and all the new things that skill allows him to communicate. Every time we take him to school or pick him up at least one teacher stops us to tell us what a fun, smart and chatty kid he is. Somehow, we never get tired of hearing it:) Also, I had to include this picture of Madelyn because it's probably my favorite picture in the world right now. She's such a happy little girl! Anyway, here's a slideshow of the last couple weekends or if you want to see the full gallery without the slideshow you can just click here.
Click here embiggen
Posted by Toby at 5/22/2010

Loved seeing all the pictures of the aquarium and can just imagine what Patrick was thinking!! So fun to see him & Nora. Thanks for recording all these wonderful memories with and for Grandma & Grandpa and Meme & Papa. Oh what a wonderful world this grandparenting!!!!

Good stuff! I love the stories about Patrick at the aquarium. And Nora is such a beauty!