Perfectly Patrick in Every Way 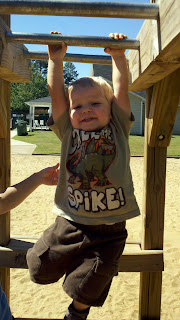 I always say, “This is the BEST age” no matter what age my kids are at the time and it’s the honest truth. With each age and stage in development there are all kinds of amazing things they are experiencing and learning. This post is about Patrick and a few of his favorite things as he ventures into his hardly terrible twos. He is 30 ½ pounds of all boy and a bundle of nonstop energy.

Letters: It’s cool to see the progression from this video taken when he was 11 months-old and could only identify 5-8 letters and their sounds. (I love the way he used to say “O.” At the time I thought he was SO grown up. Looking back, I realize he was still just a baby!) Now he sings the ABCs, identifies letters, their sounds, and then says a few words that start with that particular letter. The other day while he was playing with magnetic letters he brought me the “M” and said “This is what you start with, Mommy. And Madelyn too”. He then went on to find a “J” and said jaguar, "G" for gorilla and grandma, etc.

Animals and Bugs: I found a HUGE Diego, the Animal Rescuer book at a consignment sale (for $2.50!) and Patrick takes it everywhere. We’ve learned about pygmy marmosets, chinchillas, condors, spectacled bears, howler monkeys and Patrick’s favorite, the puma! Patrick also loves his bug vacuum (many thanks to the Garity family) and has fun catching all kinds of fun creepy crawlies in it then looking at them with a special magnifying glass. We had a ton of spider webs on the front porch when we got back from the beach last month so I threw some baking flour on them so Patch could see the intricate details of the webs. He loved it and told the spiders they did an excellent job. Of course, it made a huge mess but thankfully Roxy licked the porch (and the webs) clean which both kids thought was hilarious.

Dramatic Play: He usually starts with saying a certain animal (usually a puma or an orca) is going to “come to my house.” Then we'll prompt him by asking questions about what they are going to do together, what he’ll say to the puma, what toys he would like to show him and so on. He’ll point and gesture wildly, talking about the puma having no "pots" (spots) and about how they will run together, ride his fire truck, play with his basketball “poop” and then with his trains. I thoroughly enjoy listening to the stories he makes up and the excitement with which he tells them. Now that he is talking in sentences and capable of having a full conversation it’s so entertaining so see what he comes up with. He also loves making tents and forts and, once we are inside the fort, telling us where everything is; the refrigerator, the dishwasher, the vacuum, the grill, the puma…

Counting: We used to use his old baby spoons as a visual counting aid but now that his little sister needs them to eat we had to think of something new. So, while we were making a family scrapbook page for his school (newsflash; 2 year-olds and 6 month-olds are not the best helpers while trying to make something that requires the use of many dangerous scissor-like objects, numerous choking hazards and glitter) we used my hole punch that makes the shape of a flower. I helped him punch 10 pink flowers, 10 green and 10 blue. He counts 1-13 well so I lined them up on a big sheet of black paper. Then I asked him if he wanted to count in English or Spanish and he said English. So I started, one…he stared at the flowers but did not say a word…twooo I prompted, waiting. Finally he cried out with tears in his eyes “No Mommy! I want the uno dos tres kind!” I had to laugh. I guess we’ve never talked about what the languages were called. I usually just start counting in the one I want him to practice. As you can see, I am learning too :)

Words of the Week: We usually do 3-5 new words a week. Patch loves to learn and usually listens intently when I explain what a new word means; the process of developing film or the definition of hypothesis or stethoscope, the directions left and right (he's taken a special interest in that one lately and gets them right more times than not). Lately though, he’s been questioning our authority. Last week Toby and Patch were reading a book and Patrick pointed to a picture of the water asking about the little lines that were drawn near the shore of a river. Toby explained they were called ripples and went on with the story. Patrick, a moment later asked,”See the rickles Daddy?” Toby gently corrected him saying slowly and clearly,” They are called rip ples”. “No, Daddy, rickles!" Patrick shouted," Ri CKles!!!”

Spanish: He says vamanos about 50x a day, asks for fruta for snack, yells ayuda me in more situations than he should and any time he climbs he calls out subir. Very cute. But I realized we had issues when Patrick sang a whole song in Spanish he learned at school and I could only pick out 2-3 words. Between my lack of knowledge and his lack of pronunciation we’re a mess! I can’t fully help him progress in this area which makes me feel both ignorant and motivated. Part of me wants to reconsider having Miss Nidia come to the house to take care of the kids while I work, and ask her only to speak Spanish with them, but then there is the issue of wanting him to be with other kids to develop his social skills without the crutch of Mommy being around…or maybe Uncle Jonathan can take him to see his friend, Pedro, in Mexico City or maybe a reunion mission trip for the whole family to Akil is in order…practically speaking we’ll just have to learn Spanish from Toby and from books for now, but it’s still fun to dream.

Making Us Cry: It seems like lately Patrick’s main objective is to bring us to tears...in a good way though. He’ll look up at me while we are reading a book and whisper, “I love my Mommy” then give me a kiss. Or, when Toby walks though the door from work he’ll jump into his arms for hug and say “I love you the BEST, Daddy”. When I served him lunch the other day he asked, tilting his head to one side, “You made this Mommy for me?” I said yes, and then he said “Thank you Mommy” so sweetly I choked up. Last night Patrick laid down next to Toby after they had just finished wrestling around and sweetly said ," Daddy; we're two best friends." I think he's trying to make my heart explode. I’ve said many times that we have no idea what we are doing as far as parenting goes but we must be doing something right to have such a tender hearted little boy.

Here's a video we took this weekend on Toby's phone of him "reading" one of his pop-up books from Meme and Papa (which is why he apologizes to Meme when he's sees one of the pages is ripped).

Maddy's six month post (now that she's seven months old tomorrow...oops) will be up in the next few days. It's already written; I'm just looking through our millions of pictures of her for the perfect one :)
Posted by Angie at 8/31/2010

What a wonderful way to capture Patrick at this age-- he continues to amaze us all. Love, Meme

You may not know what you are doing as far as parenting, but I agree, you are doing it right. Actually, I think you two should write a book!!
L-o-v-e the different topics on Patrick.
Love, Aunt Jill

Love the post! I agree with Auntie Jill you guys should write a book.
Love you all, Aunt Mandie

Agreed--perfectly Patrick! He's amazing, and so are you guys. We love learning from you as we raise our own!