Now that I've recovered from reading Angie's post, I'll write one about the rest of the beach week. 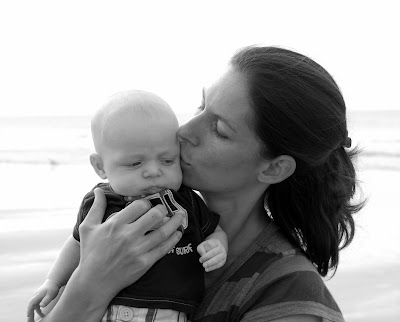 I think it says something about the week that Patrick lost his voice the very first night we were there from singing and talking so loud. It was really just non-stop fun from the second we arrived. (And only from the second we arrived since all the seconds spent driving before that were...well, not quite as fun.) This beach trip had several big highlights for us. The first is in the post Angie wrote below about Abbie and Matt's engagement (not sure if you can still read it after everyones' tears smudging the ink). The second awesome thing that happened was that we all got to meet Mandie and Tim's son, Creighton! Creighton is 3 months old, very smiley and super fun. And I gotta say, the kid's a trooper. He flew in from Idaho which meant a 12 hour trip and crossing multiple time zones. Then ended up in a house with a ton of people who all talk and laugh very loudly and usually at the same time. Creighton took it all in stride like a champ though and smiled and cooed his way through the week. 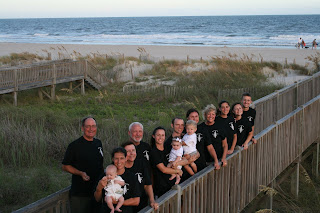 We had other out of town visitors for this trip too. Cousin Rhiannon accompanied Mandie and Creighton on the trip from Idaho and her mom and dad, Auntie Ronnie and Uncle Jeff, made the drive from Wisconsin. Rhiannon, Ronnie and Jeff are three of the nicest and coolest people you'll ever meet. We always love spending time with them and hearing about all the family in Wisconsin and Idaho and what everyone's been up to. They also always bring a seemingly endless supply of wine, which doesn't hurt either. As an added bonus, Reenie made everyone beach shirts with quotes from one of the girls' favorite movies from growing up, Back to the Beach (close-ups in the gallery).We were really happy to have a chance to hang out and for Patrick and Madelyn to get to meet them as well.

Although Patrick's voice was a bit hoarse, it didn't dampen his spirits at all. He loved playing on the beach, chasing the waves, riding the boogy board, using his Bug Vacuum and swimming in the ocean. The part of the week he tells everyone he sees about though was the crabbing. One night, we kept him up way past his bed time and let him come out on the beach to go crabbing with all the "grownups." 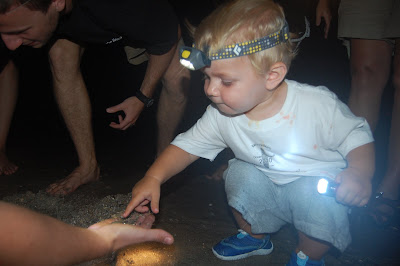 He got to wear a flashlight on his head and carry a net, which in his current explorer/rescuer phase was a huge deal. We walked up and down the beach searching for crabs and diggers and found plenty. Patrick talked the ENTIRE time about everything he was seeing and whenever he ran out of things to say he'd just remark "It's soooo daaaaaaark." If you ask him, or even if you don't, he'll tell you all about the different crabs we found: the one that pinched Papa's finger, the one that didn't have any pinchers (which always makes him sad), the two that were "hugging" and the little diggers which he always says are "so cute." The cutest part of the walk was seeing him feel like a big boy. He walked with a larger-than-normal stride, carrying his flashlight and puffing out his chest.

Madelyn had a great time at the beach as well. A lot of times when we play with her at home, we'll blow on her face as a fun game. So, standing on the beach with a constant breeze just feels like someone is always trying to play a game with her. Every time we walked outside she would smile and squeal. 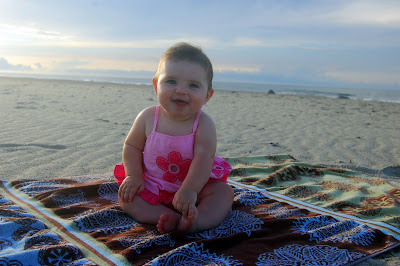 She loved putting her legs in the water, feeling the waves wash up against her and really enjoyed putting her bare feet in the sand. We set up a little tent for her and Creighton on the beach so they could hang out in the shade while we were playing in the sun. Luckily, she was usually pretty gentle with baby Creighton and didn't pull his hair too hard or try to kiss him too much. It was very cute watching her with a baby that's younger than her. She also spent a lot of time working on her crawling. She's gotten pretty good at scooting around now but really wants to crawl. She gets up on all fours and rocks back and forth then usually ends up moving backwards.

Thank you SO MUCH to Meme and Papa for an incredible week. As you can tell by our five-million pictures, we had an awesome time. The kids enjoyed themselves so much and we enjoyed watching them experience another wonderful year at Ocean Isle. So thank you for all the memories and stories to tell for years to come. Below is a slideshow of pictures from the week, or you can go straight to the gallery by clicking here: