Although this picture may not look like much, it was the first picture Patrick took by himself with the underwater camera we found at the beach house. 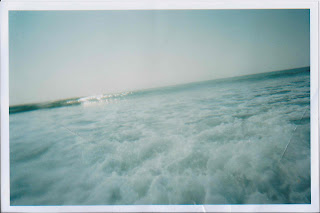 Meme and Papa bought Patrick a book called Flotsam as something new for him to read at the beach. This is one of those books that only has pictures to tell the stories and no words. Like most books, Patrick loved it. To be honest, there was a time I really didn't like reading these kinds of book to Patrick. As an adult I had apparently forgotten how to use my imagination to create anything inventive or a story worth telling when the words weren't given to me. Now though, I love when we get to do books like this. Both because it's fun to make up a story and because I now see the advantage of a completely open narrative in terms of timing. On nights when I need to make it a quick story, I can. Sometimes I need to draw the story out a bit longer for whatever reason and I'm able to do that too. But really, reading anything with Patrick is fun because he enjoys it so much.

Anyway, this story is about a boy who goes to the beach with his family and, while playing close to the water, gets knocked back by a wave that washes an old underwater camera up on shore. The boy takes the film out of the camera and has it developed then goes back to the beach to look through the pictures. He sees all kinds of crazy underwater activities like robotic fish and an octopus family sitting on couches reading, but the last picture is of a little girl. That little girl is holding a picture of a little boy holding a picture of another little girl and so on. The boy who discovered the camera takes out his magnifying glass and looks all the way back to the first, black and white, picture taken with the camera of another little boy standing by himself on the beach waving at the camera. Our boy then takes a picture of himself holding the developed photo and throws the camera back in to the ocean. On the last page, we see it wash up on shore in front of a little girl on the other side of the world.

Patrick thought this was pretty great and had us read it at every nap time and bed time for the whole week. Since we had found a disposable underwater camera when we arrived at the house we thought it would be fun to recreate a little bit of the Flotsam story for Patrick. One day while he was playing near the ocean I put the camera in the water and let the waves wash it up on shore near Patrick. We all made a big deal out of it and he got really excited about using it to take pictures under and in the water.

So that's just what we did: 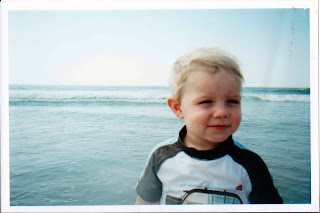 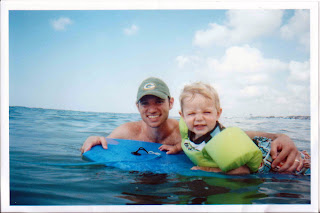 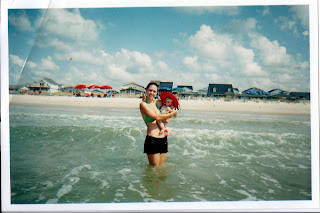 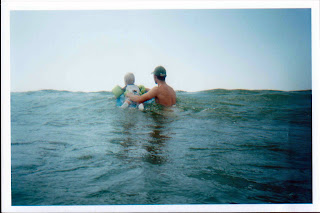 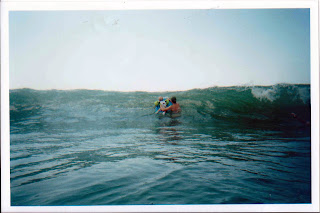 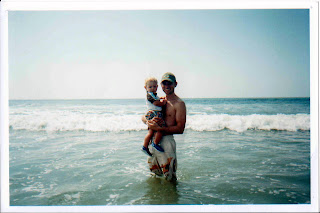 Patrick had a blast getting these pictures developed when we got back home. The coolest thing was that one of the pictures was of the little girl who must have had the camera before us. Patrick is still convinced she's the little girl at the end of his Flotsam book. 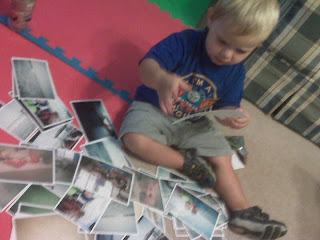