Well, the title of the post kind of says it all. Today Angie and Patrick and I visited the OB where Ang had a sonogram done that very clearly revealed our bun in the oven is a little baby girl! Obviously, we're both ecstatic and can't wait to meet our daughter (...that's really fun to say).
The sonogram was very cool, as our little girl was active and seemed to be trying to put her hands in her mouth. The doctor said everything looks great, she has a healthy heart beat, is measuring well and is already about 12 ounces; which puts her in the sixty-fourth percentile.
We have the whole video recorded onto a VHS (!!1992!!) so I'm going to try to convert that into a digital format that I can post on here. We also have a few pictures that we'll scan in and see if they look like anything. If they do, I'll post those up here as well.
In lieu of a video or pictures of the new baby, I'm going to post the pictures from when we told our families we were pregnant with #2. Here's how it went down...
We started with Grandma and Grandpa Flowers. They came over for dinner one night and right as they were about to leave we told them we had taken some cute pictures of Patrick earlier that day in the wagon they gave him. We showed them a series of three or four pictures and ended it with this one: 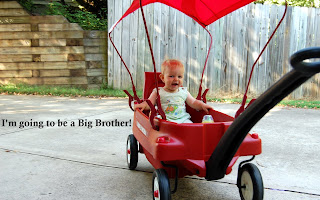 Of course, they were surprised and happy and mad that I waited till they were about to leave to show them the pictures. Then we had to devise a plan to get the rest of our family together to tell them. More on that in a minute though.
Next up was the Suskays. We were all going to Ocean Isle for the annual trip so we thought it would be a perfect time to tell them. One night as we were finishing dinner I told everybody I wanted to get a picture of the whole group together. They all posed and I said "1...2...everybody say "Angie and Toby are pregnant again!..." and then started taking pictures. It was great. We got everyone's reactions on film and it's hilarious to see the order of who catches on the quickest. Before I show the series of pictures, I'd like to point out in advance Aunt Abbie's face. It's priceless. It remains the same for the first several pictures while everyone else around her reacts. The first thing she said when she saw the pictures afterwards was "Oh my gosh! That's not how I felt!" Perfect. Here they are... 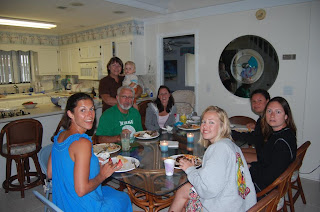 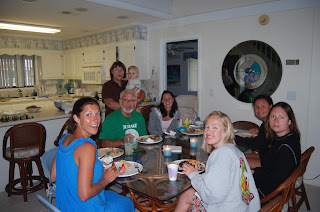 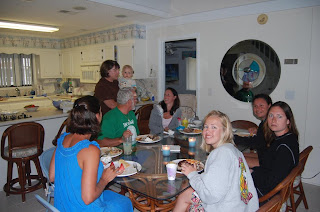 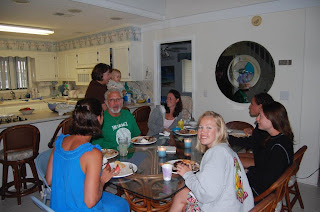 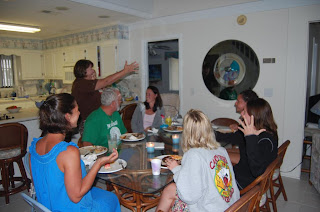 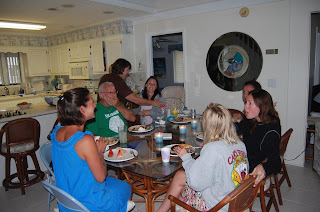 Those seriously never get old to me.
Once we were back from the beach, Grandma and Grandpa Flowers helped us hatch a plot to get all the siblings together. They told everyone we were having a back to school dinner and dessert like we used to do when we were little. It was a tradition in our house that every summer right before we went back to school, my mom would bake a cake and we would all go out on the back porch and eat it with our hands. Kind of a last hurrah before we all took the bus back to serious town.
So, we all got together and when it was cake eatin' time we pulled the same ol' trick since it had worked so well the first time and got everyone together for a picture. Apparently I mumbled though and Brandon and Jonathan thought I said "Angie and Toby aren't pregnant again!" Which isn't so exciting*. Thus, their reactions are a bit lackluster. But Anna and Katie and Tom are all fun to watch. Here they are... 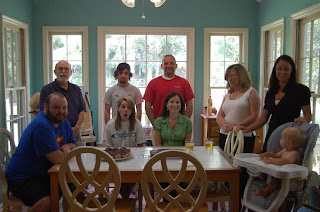 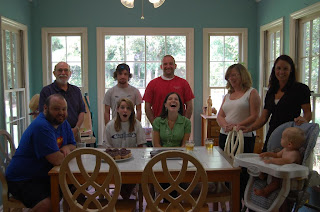 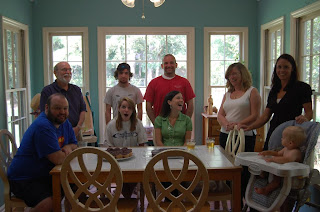 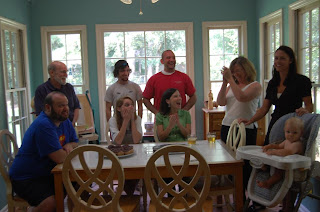 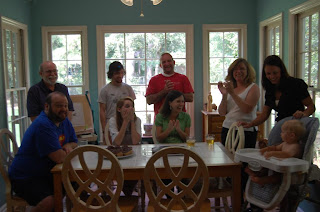 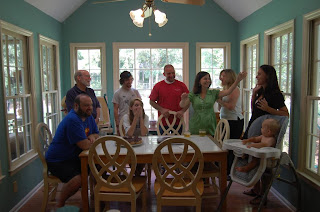 And that was that.
*Actually, in retrospect, that's hysterical that they thought I would announce that and trying to imagine what was going through their minds is very funny to me.
Posted by Toby at 10/08/2009

Email ThisBlogThis!Share to TwitterShare to FacebookShare to Pinterest
Labels: Madelyn

Those pictures are awesome!! I could watch those series over and over again and smile every time. What an awesome idea!

And, a girl baby!! How wonderful.
Love you both =)

Oh my goodness. Thos pics are great. Abbie's face is PRICELESS. I cannot wait to meet your daughter!!!!!