What Patrick's Been Up To 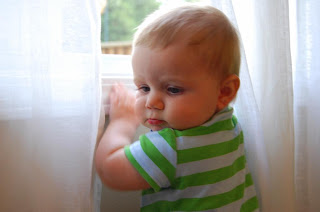 Here are a few things Patrick's been doing lately...

He's figured out how to unscrew the legs underneath our kitchen table. There's one nut that's a little loose and he crawls under, pulls up on the chair and uses one little finger to unscrew it until it falls off. Then he pulls the washer off and tries to go to work on the next one. You'll notice he's completed step one in this picture (blue arrow pointing to the result). 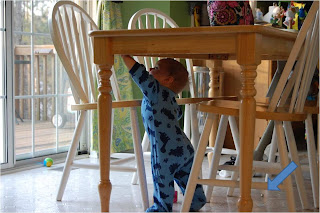 Patrick also attended his first pig roast last weekend. It was a birthday party for our good friends Alex and Kim. We'll spare you the picture of the pig roasting over the fire and just show you this one of the birthday boy and me; both proud parents. 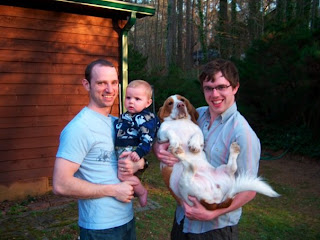 Patrick also learned his first official "trick." If you ask him "how big is Patrick?" he'll respond with this (to which you reply "Sooooooo big!") 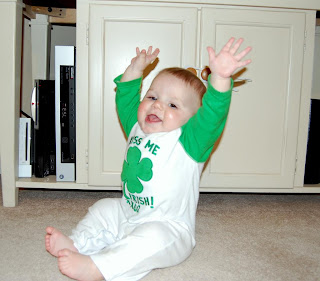 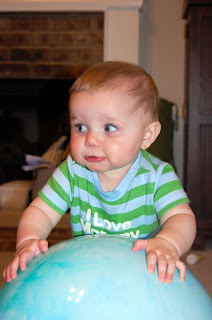 Talking and making a silly face while playing with his new ball. 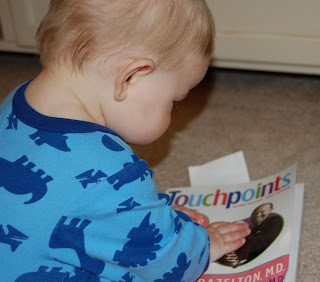 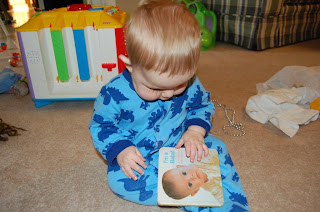 Looking at babies on book covers. 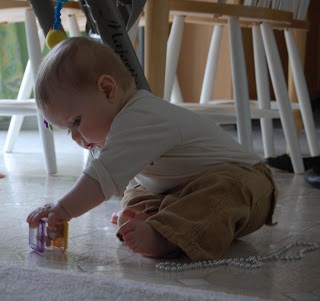 We also had our first "bleeding from the face" incident this week. Patrick slipped while playing and his two new teeth cut his top lip when he bumped his chin on the way down. It's really perfect timing because we're getting his 9 month photos taken tomorrow. The pictures are doubling as Easter pictures which means there will be a live bunny in them. So, we may also have our first "being bit in the face after tackling a stuffed animal that turned out to not be a stuffed animal" incident, too. We'll let you know how it goes.
Posted by Toby at 3/28/2009

What a smart little man, taking things apart! And the 'sooo big' picture is precious! Can't wait to see those teeth!

Ahh sorry about the fall Patrick. I can't wait to see your Easter pics. I turned on your mommy's digital photo frame at work to check you out today!