A Walk Around The Yard

Patrick loves being outside. Something so simple as rocking on our porch swing can entertain him for an hour or more. He squeals at the trees blowing in the breeze, the children playing in the cul-de-sac and, of course, at Roxy chasing birds around the yard. A walk in the backyard turns into a new world of discovery for him. He babbles the whole time; talking to the leaf he found in the grass or telling me how he feels about the fact that I won't let him pick up a dead worm on the driveway. 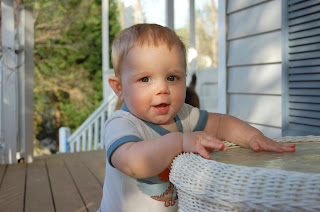 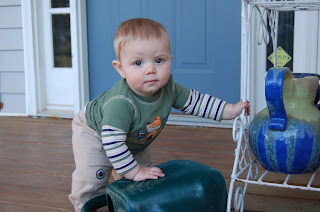 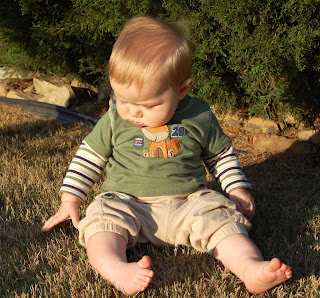 While I was taking pictures around the yard I realized two things:

1. I haven't taken many pictures of anything other than my son in the last nine months - it's about time!
2. It's a bit more challenging taking pictures with a squirmy little boy in my arms - good thing plants are so still! 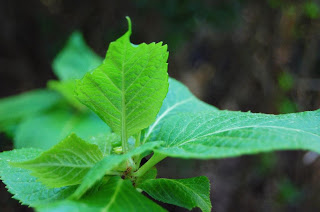 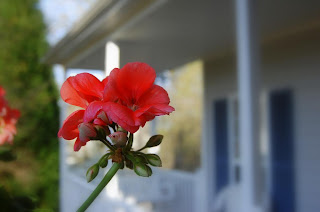 Patrick's sleep habits have been changing lately. He has been transitioning to one nap in the middle of the day instead of two smaller naps. His bedtime is also getting earlier, which has been great. Several nights this week he's slept 10 1/2 hours straight-AMAZING! 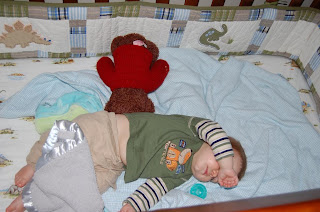 The other day I decided to put Schwarz the bear in Patrick's crib with him while he napped. I am not sure why we haven't done that before. About an hour and a half into the nap I heard him waking up and talking to Schwarz. I decided to wait a bit before I went in to get him. Ten minutes of talking and squealing later, his room was silent. I went in and he was sacked out on top of Schwarz. Unfortunately I didn't get a picture of it but I did get one later of him next to the bear. It was a marathon three hour nap! I know his schedule will continue to change but for now we are loving it. He really is the easiest baby ever! 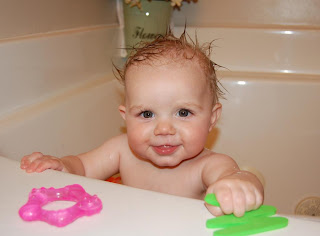