Angie heard a story on the radio earlier in the season that, I think, almost made her cry. It was about the number of families with real Christmas trees vs. fake trees. I don't know the exact numbers, and I'm too lazy to open another tab and Google it, but there was an astounding number of fake tree families (FTF).  It was apparently a number higher than Angie's psyche could take because she brought it up several times over the next few weeks.

Angie and I have always had real trees and always liked the whole process of going to a tree lot, picking one out, driving home with it on top of the car and then spending 16 hours trying to get it to stand straight in the tree stand. Most of our trees have done well except for the one time we went to Lowe's and found out when we took it down that there were THOUSANDS of some kind of bug living in it and had now died on our carpet. That year kinda sucked. But other than that, live trees have gone well. This year's tree was especially great due to poor measuring and/or labeling on the tree merchant's part.


We usually go to a big local tree lot and pick out the tree but this year, in the name of efficiency, we ended up just getting it from Home Depot since we were there for other stuff anyway. We were a little wary after our Lowe's experience a few years back but we thought we'd chance it. Our house has 10' ceilings so we headed for the 8-9' section of trees. We figured, even if we got the tallest in that section, we'd still have a solid 12 inches to spare on top (good thing I did that really complex math for you. Sorry.). The kids and Angie unanimously agreed on what appeared to be a very large tree. But, it had a tag (and, more importantly, a price) on it that clearly said "8-9 feet!" Fast forward to us at the house and me trying to stand the tree up and we quickly realized the tag was not accurate at all. The tree scraped the ceiling then bent...a lot. It was at least a foot too tall. I think Madelyn expressed it best when she saw it fully standing up and said with wonder and awe "*gasp* Daddy! It's touching the sky!" After a good laugh, some tree trimming and creative star hanging/tying, the tree actually looked pretty darn good. 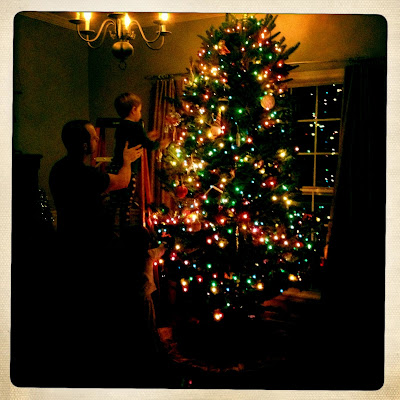 Once all the branches settled, it felt like the tree took up half the room. But it was great. The whole house smelled like Christmas and the kids loved decorating it, playing around it (we put it in the playroom) and hiding things in it. The tree also lasted longer than any other we've had and was healthy right up till the end. Last Friday, we finally had to let it go. I'm pretty sure I saw Angie hugging it one night before we went to bed. 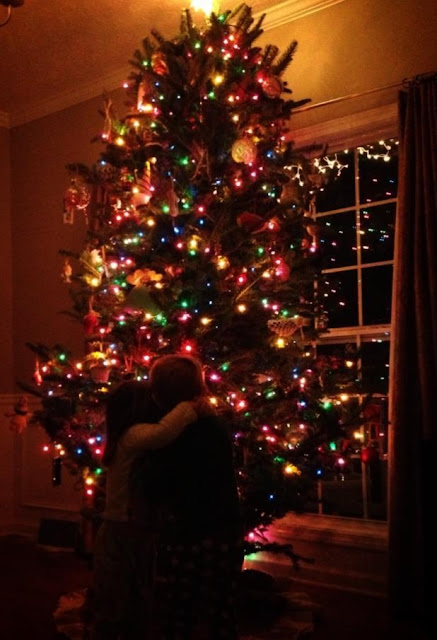