A couple weekends ago, Katie and Brandon had a wedding to attend in Florida and asked us to take care of Carson while they were away. We've been trading spend the nights since around Christmas and each time has been very fun. Our kids stayed with the Beans in March and we couldn't wait to return the favor. As an added bonus, Mandie and Creighton were in town so all 4 cousins got to hang out together for some of the weekend. Here's how it went down (hope you're ready for a ton of pictures)...

Friday:
Katie dropped Carson off in the morning and the fun started right away. The kids played at the house for a bit then headed to the playground where they met up with Aunt Mandie and Creighton. 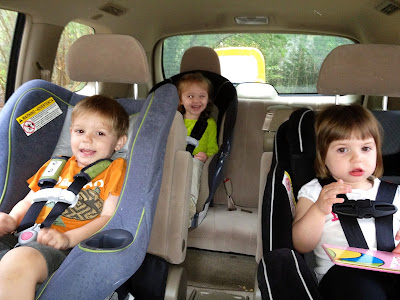 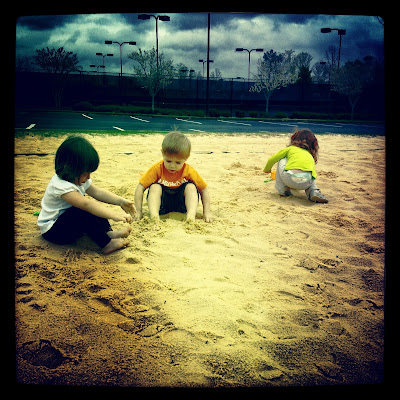 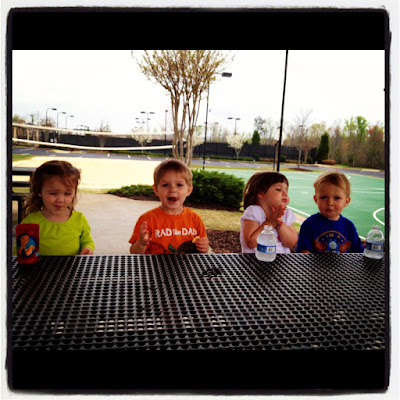 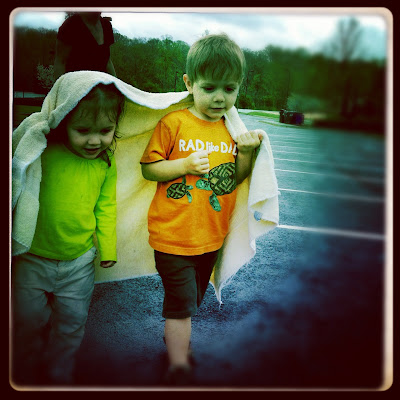 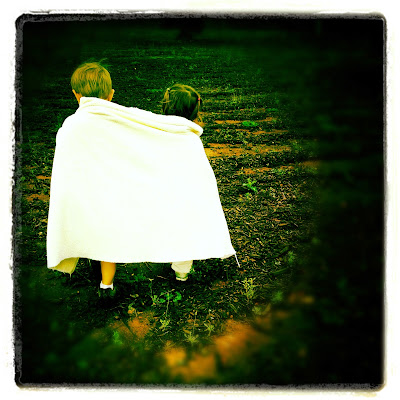 Luckily the rain was brief and racing down the back yard hill quickly became the game of the afternoon.


After nap time (which went surprisingly well considering Carson and Patrick slept in the same room) it was time for a rescue mission to find stuffed animals around the house... 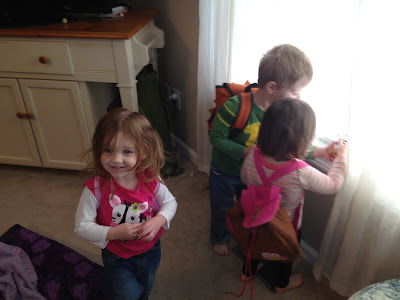 followed by dinner, lots of dancing, balloon races and a bath. 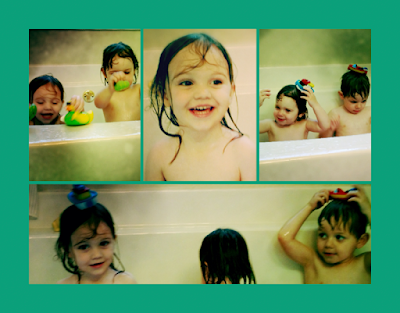 Saturday
...was jam packed with fun. We started with Patrick's soccer game in the morning. Patrick had a ton of fun playing and the three cousins hung out off-field (for the most part) watching all the 3-4 year-olds run around trying to play soccer. Angie said that when she told Madelyn she was going to put pigtails in her hair, Carson asked to have them too. It reminded Angie of Rhiannon, Mandie and her dressing alike when they were little so she put the little girls in matching jeans and pink shirts too. 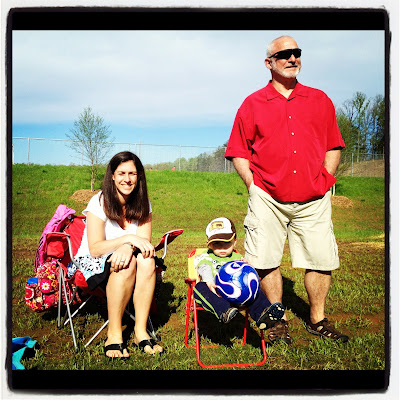 We'll have a whole separate post about Patrick playing soccer in the near future but just look at this guy go... 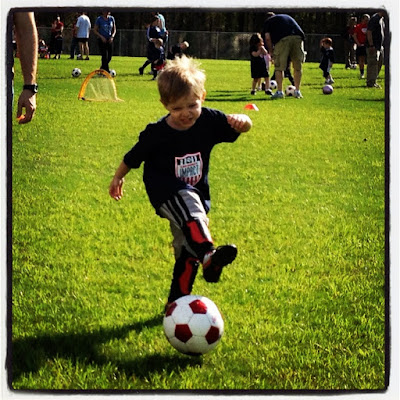 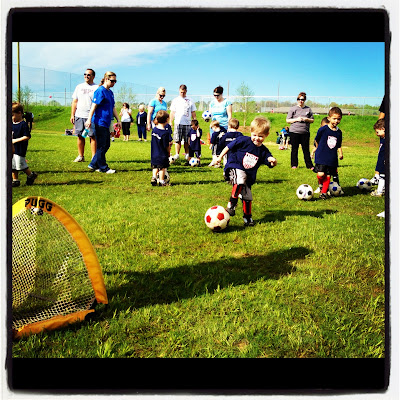 Once soccer was over we went home and put the kids down for about a twenty minute nap after lunch then woke them right back up to head to our next big event: Jordan Barker's birthday party at Monkey Joe's. (Side-note: Carson must think all we ever do is go to bouncy houses. We took her two times around Christmas then had Madelyn's birthday party at one and now Monkey Joe's for a party. She's going to grow up thinking we're some kind of circus family that spends every weekend practicing our jumps and bouncing tricks.) 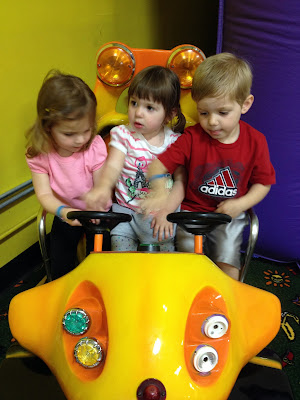 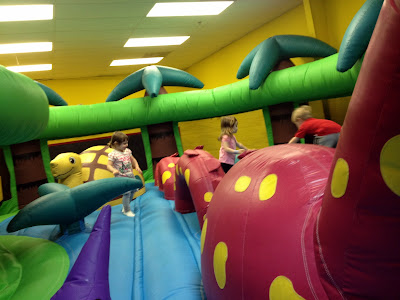 After a couple hours of running, jumping and bouncing, we went to Taco Mac with the Barker family followed by Bruster's...

And as if that wasn't enough excitement for one day we still had some fort building and movie watching to do. The kids snuggled up in their sleeping bags in our living room fort and watched Winnie the Pooh. 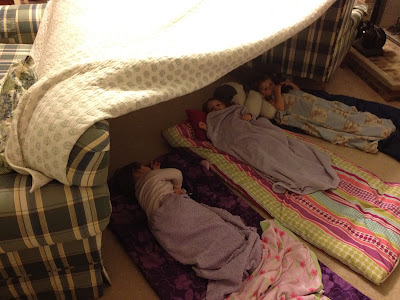 Sunday
We thought we'd take it easy Sunday because of our crazy Saturday but the kids started asking "where are we going today?" so we packed them in the car and headed out almost immediately after breakfast. We stopped to get Patrick a (MUCH NEEDED) haircut then grabbed some lunch from Hot Dog Heaven to eat at the park. 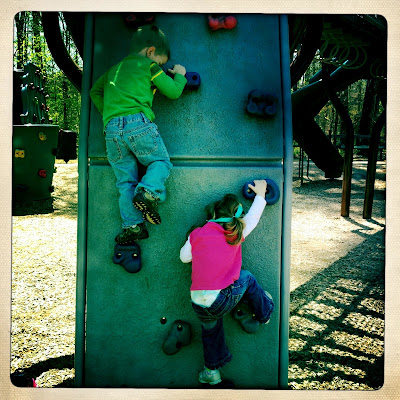 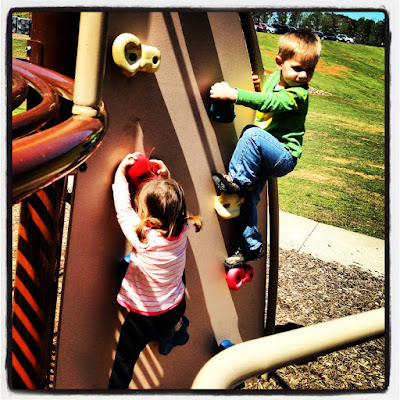 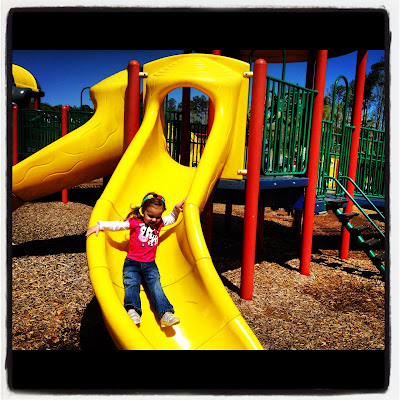 And that was pretty much it. When we got back home, all three kids literally stumbled their way up the stairs and barely made it through the door before falling asleep. It wasn't long after they woke up that Katie and Brandon came to get Carson. 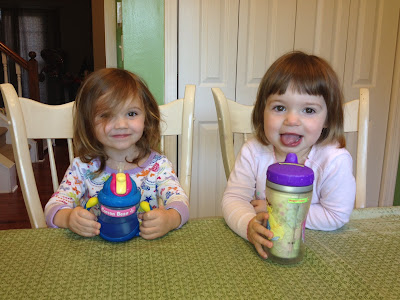 Angie and I had such a fun time with Carson staying over. She's so sweet and handled going from her normal routine to our crazy, busy, loud weekend pretty darn well. She loves Patrick (or "Pats" as she calls him ("ch" comes out more like an "s" and it's really cute)) and was happy to follow him around most of the time. She kept tabs on each member of our family too. Any time one of us left the room she'd ask "Where's Aunt Angie going Toby?" or "What's Maddy doing Aunt Angie?" 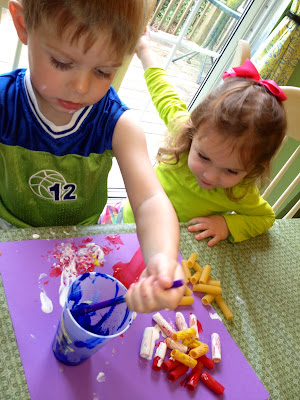 We really weren't sure how Carson sleeping in a pack n play in Patrick's room was going to work but they both did great. On Friday when they were going down for nap, Patrick felt he needed to help Carson acclimate to the new arrangement and Angie heard him over the monitor explain everything in his room to her. Then he told her "If you hear a scratching kind of noise or something, don't worry, that's just me probably rolling around while I'm asleep, OK? OK. Goodnight sweet pea." HE CALLED HER SWEET PEA! So cute.

We were also surprised at how easy it was to have all three kids. We expected to be constantly chasing them around, trying to resolve sharing issues or helping someone eat or go to the bathroom but it was amazingly pretty smooth. Now, we don't harbor any delusions that having three kids is easy; but when one of the kids isn't yours it means that none of the kids ever got tired of the other one. 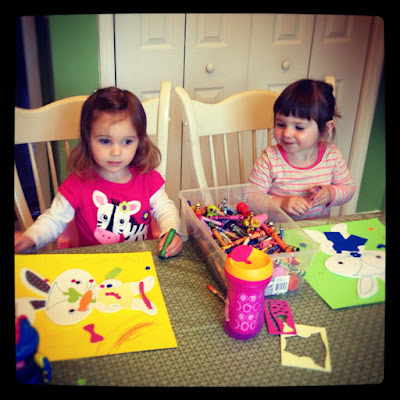 When it's just Patrick and Madelyn, by the end of the day they each want their own space for a bit. But when there's three, they never spent enough time with just one other kid to get tired of them. And Patrick and Maddy were so excited to show Carson everything that they never got bored of toys they've played with a million times. They all played great together and Angie and I just kind of got to sit back and watch. It also helped that they were completely exhausted from all the activities and probably couldn't muster enough energy to get upset with each other anyway :)

Thank you Katie and Brandon for trusting us with Carson for a full 3 days. She was awesome for every minute of it and we can't wait to do it again soon!
Posted by Toby at 4/03/2012

What a fun weekend!!! Can I ask a completely unrelated question? What type of car seat is Patrick in?

Yay! Thank you guys for helping us out by keeping her, taking such good care of her, and making such sweet memories for her and her cousins! She talks about you guys every day and is forever counting down to the next time she'll see you. I love all the pictures, especially the one of her looking over the top of her glasses, the backs of her & M watching soccer, and her & P walking in the rain. We're so blessed to have such great family so close!

This is so much fun. Makes me wish I was young again. Thanks for sharing.

OK...I got Moe! Yall got Carson! What's the deal here?? I say we need to take turns! I know C had a great time. She told me no less than 100 times that she was going to Toby and Aunt Angie's house! So excited......you guys are great and she loves you all so very much!