Before Patrick was born, Angie and I hadn't discussed in detail our plans for his pacifier use. We just kinda figured we'd play it by ear and follow his lead. Then, after Patrick was born, every lactation consultant that came to our hospital room warned us of the myriad dangers associated with pacifiers, each more terrifying than the last. Things like speech delay(!), ear infections(!!) bucktooth syndrome(!!!) (BTS as I call it. They never called it that.), NIPPLE CONFUSION(!!!!), and the list went on. Naturally, we left the hospital with the idea in mind (and fear in our hearts) that we'd refrain from using a pacifier. However, mere days into Patrick's life, as we sat waiting for the pediatrician at Patrick's first appointment, and Patrick sat in his carrier crying his little heart out with no amount of "it's ok sweetie" or Twinkle Twinkle Little Star helping, we popped the paci in his mouth. He quieted right down and fell asleep. Angie and I looked at each other and said, "Well, I think that answers that." 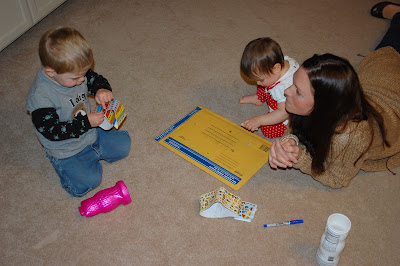 Since that day, Patrick has used a pacifier when he goes to bed. We didn't let him walk around with it all day while he was playing, because he didn't need it. It was just something he used to soothe himself before drifting off to sleep. It worked marvelously. The combination of his blanky and his paci signaled his body that it was time to shut down. We loved that. But, all good things must come to an end, and so, the day before Patrick turned 2 1/2, we pulled the plug on paci.
We had been preparing him for it for a few weeks. We told him about how he was getting to be such a big boy that he didn't need the pacis any more and pretty soon we'd be sending them to the babies so they could use them. After a week or so of subtly slipping that into conversation, he started talking about it on his own and seemed pretty cool with the idea. On the big day, Angie got out a large envelope and a bunch of stickers and markers and had Patrick decorate it. This would be the package we used to send the pacis to the babies. He was really excited about the whole thing and loved decorating the envelope. That afternoon, when I got home from work, we mailed them (and, of course, he wanted to where his "pirate sleeves" from the Garitys (really supposed to be leggings for Madelyn) and his "dragon hat" from Uncle Jonathan, who happened to be at our house that afternoon hanging out)...

Once the pacis were in the mailbox we came back inside and told him what a great job he did and how happy the babies would be to have new pacis. Then Angie snuck out and dropped off the gifts the babies were giving him back at the mailbox (a big plush Diego, a small plush Baby Jaguar and a new Diego Tag Reader book). A few minutes later, he spotted them and we went to check them out...

That night, we let him stay up a little later than normal and have popcorn and watch an episode of Diego (what else?) after Maddy went to sleep as both a special treat for being such a big boy and a way to tire him out so hopefully he'd go right to sleep despite being paci-less. He slept great that night. No fussing at bed time, only asked about the pacis a couple times and didn't wake up at all through the night. In the morning I looked at Angie and said "No way was it that easy...". And, for once, I was right about something :)
Nap time the next day did not go nearly so well. He cried and yelled for about 45 minutes before talking himself down with the cutest/saddest story ever told in which The Mailman hears Patrick crying, goes and finds The Babies and explains to them that Patrick needs his pacis back and then triumphantly delivers the pacis to Patrick's bed. It's the roughest 45 minutes of parenting I can remember in a while. At one point, I came downstairs and Angie was making dinner and listening to him on the monitor crying over and over "Mooooommy! Help meeeee! Pleeeaaaaase!" I decided it was best to turn the monitor off for a few minutes to give Angie a break from the torture. Right as I was about to turn it off though, he started saying "Daddy was here...and then he left me...but I'm still cryyyiiinnnnggggg! But, but, he just left me. But, Daddy, I'm still in here cryyyiiiiinnnnggggg!" It. Was. Terrible. It took everything I had not to simultaneously fall down right there and run up the stairs to go hug him till he was 18 years old. But, Angie and I restrained ourselves and he eventually fell asleep. When he woke up, he never mentioned the  pacis or how we left him or how we should start saving now for his therapy sessions to deal with his unavoidable abandonment issues.

Over the next few days, nap times got increasingly easier with the crying time cutting in half each day. It worked out great that the following week was the snow week because it meant both Angie and I could take a little extra time with him to put him down for nap while the other one of us watched Maddy. The first few nights of being without the paci, Patrick didn't cry but did talk. A lot. One night we put him down at 7:15 and heard him still talking at 9:30. But, that has stopped now too. He still has rough nap times occasionally but all in all it only took about a week to feel confidently out of the woods.

We're so proud of our little guy for giving up something he's used for that long. That has to be a huge change. We're also really proud of Madelyn who never woke up once; even with all of his talking and sometimes crying over that week. She was such a trooper going right to bed when we needed her to and letting us spend a little extra time helping Patrick get used to life without paci.
Posted by Toby at 1/28/2011

WOW! It takes a lot to be a parent! Toby and Angie, you have truly shown so much love for both of your beautiful children! It amazes me how much thought both of you put into all the learning experiences for you children. Every big event in growing up you have made it fun and something to remember.

Thank you so much for the post, it really is inspiring and knowing that there are wonderful and loving parents. You both are doing a great job in your parenthood! Love you all very much!

Congrats Patrick!!! You are so smart!

I think you two should write a book on parenting!!!
They are both so lucky they have you as their parents!!
Can't wait to see you soon!
Love, Aunt Jill