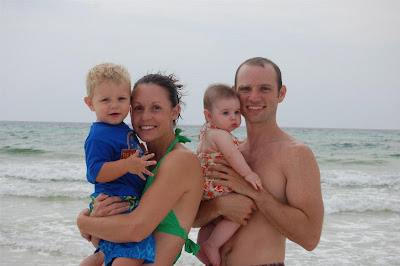 Only a few hours after we returned from our beach trip with the Flowers last weekend, Patrick was getting dressed after his bath and said "I'm tired." Angie replied by saying "I'm with ya buddy. I'm tired too." Patrick realized he had been misunderstood and rephrased his statement to "No, Mommy. I'm tired . . . of this house." And after an awesome week at the beach, we really couldn't blame him.
The whole trip was great. The ride there and the ride back went better than we could have imagined for our first long trip with two little ones. Both there and back we left around 5 or 5:30 in the morning, stopped half way for breakfast and leg stretching, then drove the rest of the way. Madelyn slept almost the entire time both ways, waking up just a few minutes before we stopped to play with some toys hanging from her carrier. Patrick did awesome as well. We got him (really, us) a portable DVD player for the car for his birthday. He's now been introduced to the world of, and is in love with, the show 'Go, Diego, Go!' (or "Degyo", as he says it). 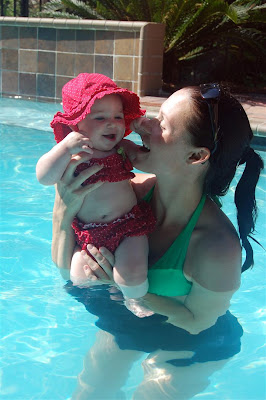 The house we stayed in was amazing. It had tons of room for the whole family, a great place to chill out on the porch and a swimming pool we all loved.
The best part though was getting to spend time with the family. It was awesome having everyone together for a whole week and just getting to relax. There were no schedules, no "we can make it for dinner but then we have to run so the kids can get to bed" and tons of laughs. Patrick of course loved having an audience for his silly antics. He was thrilled to have a houseful of playmates willing to indulge him in whatever game he wanted to play every second of the day. And it was so cool to have Madelyn and Carson together for the week. I think Carson taught Madelyn to sit up, as since we've been home, Madelyn has loved sitting up to see the world from a whole new vertical perspective. It also gives her access to a new range of toys which is exciting for her. 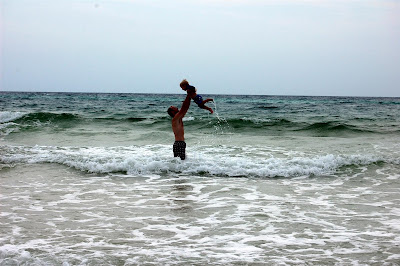 Something very different about this trip from ones in the past was that, while it was relaxing, having two kids means someone is always awake. No hours on end of laying on the beach and reading an entire book in one afternoon. In fact, I think there was only one time the whole week when Carson, Patrick and Madelyn were all napping at the same time for more than 15 minutes. Naturally, we used our "grown up time" to do incredibly grown-up things like play Marco-Polo and try to push each other off the giant inflatable Nemo pool toy. When the kids woke up we told them we had been discussing politics and literature; to which Patrick replied "I want to go to the beach", Madelyn spit up and Carson growled. I don't think they're onto us.
Thank you, thank you, thank you to Grandpa and Grandma for such an amazing time. Words can't tell you how happy we are to have been able to spend a whole week with the family in such an incredible place. When we first got home, Patrick ran in from the car, walked to the living room and quietly lamented "Everybody's...not here." He's asked about each of the family members every day and has retold the stories of sand castles, crab leg-cracking, waterfalls, dino delight, the couch cave and every other special moment countless times.
Here's a slideshow of pictures from the week or you can view the gallery in its entirety here:
Posted by Toby at 7/21/2010

What a gorgous place but more important what a beautiful memory you have made. Papa

Patrick replied "I want to go to the beach", Madelyn spit up and Carson growled.

I don't know how you narrowed down your 700+ pictures, but they're great! Miss you guys!

Hi Toby,
My name is Jane and I'm with Dwellable.
I was looking for blog posts about Santa Rosa Beach to share on our site and I came across your post...If you're open to it, shoot me an email at jane(at)dwellable(dot)com.
Hope to hear from you :)
Jane