We've discovered Patrick LOVES being on his stomach! Most of the time I'm not even sure he realizes there's a difference between his back and his stomach so he's just as happy either way. He's also gotten pretty good at holding his head up for a 3-week-old (at least, in my overly-biased-Dad opinion). Here are a few pictures of him on our bed looking around (at 2 weeks) 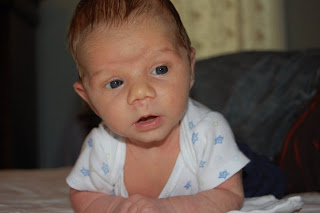 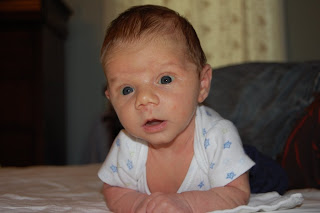 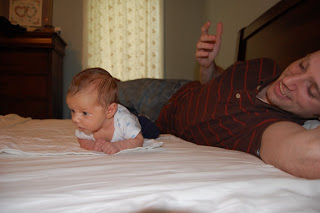 And here's a video of him following the camera with his head at 3 weeks (he's not lifting his head up very high on this one...probably because it's about the millionth time I had him do it. Why didn't I film it the first 999,999 times he did it? I have no idea. Hopefully he gets his Mom's brains.)

Holy crap! It's crazy to see how much he's changed in just a few weeks! And he looks like...us. I just mean generally, there is something very Flowers-esque about the way he looks now that I can't quite articulate.

HEY EVERYBODY, COME SEE HOW GOOD HE LOOKS!

Patrick is so adorable!! I love his little noises! I can't believe how well he is holding his head up. I can't wait to see him!!

Oh my goodness what a cutie!! We are all totally in love with the little guy and wish we could be there to hold and hug and kiss him. All our love to the 3 of you.
Jason, Vicki, Josh, Nick, & Alyssa