WOW things have been busy. Crazy, crazy busy lately. Most of it has been great but it's definitely kept me from staying current with the blog. I'm still working on Madelyn's 3rd birthday party video (for the party that happened in FEBRUARY) and we have a million other things to blog about. But, rather than trying to catch up on all of them I figure we'll just start with something recent and I'll fill in the past as we have time. Sound good? I thought so.

We started out by spending Friday night with Meme. We had pizza, danced, and chased each other around in the backyard for a LONG time. The kids were exhausted by the end of the night which is always a good sign that fun was had :)

Saturday was Angie's Mother's Day. This year, she banned me from purchasing anything for her as a gift or making a big craft with the kids for her. That didn't leave me with many options to show her how much she means to us other than just repeating over and over "We love you, honey. I love you. The kids love you. You're great. We love you." all day, which would get very old very fast. But, I found a loophole in the plan. Instead of buying her a gift, I bought a whole lotta her favorite foods for the day and sent her out to get her nails done.

While Angie slept in (Angie almost never gets to sleep past 5:30) the kids and I prepared her favorite breakfast: omelets. We got all her favorite fillings/toppings and chopped and cooked away until she woke up. 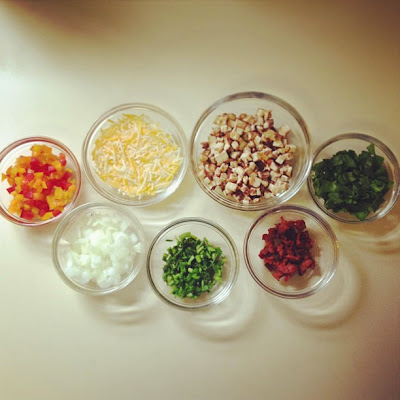 Then after some play time around the house, the kids and I went to get everything we'd need to make Angie dinner while she went to get her nails done.

Dinner ended up being much larger than I had originally planned because I kept thinking of things Angie would like but neglected to remove items from the menu as new items were added. So, we ended up having grilled filets, grilled bacon-wrapped bourbon shrimp kabobs, grilled vegetable kabobs, grilled chicken, sweet potatoes, grilled romaine hearts with avocado lime dressing and, of course, some wine :) And for dessert, Angie's favorite: cupcakes from Small Cakes. This is a picture of mine (somehow, all the others were gone by the time I took the picture). Yep, that's bacon on that cupcake and it was magical.


On Sunday, we got together with my side of the family to celebrate birthdays and Mother's Day. We met at the river park and it was a PERFECT day to be outside. The weather was awesome and the kids had a blast. It's so fun to see the three older cousins play together now that they're all capable of about the same things. Even Declan joined in on the swinging action!


After lunch and cupcakes at the park, we headed over to the Chattahoochee Nature Center. As usual, the kids loved seeing all the owls and eagles and other animals but we got a bonus this time of seeing an opossum and corn snake out of their cages. Pretty cool stuff.

All in all, it was kind of a perfect weekend getting to see everybody and celebrate the Moms in our lives.


Here is a link to the gallery with some more pictures from the weekend.
Posted by Toby at 5/29/2013

Email ThisBlogThis!Share to TwitterShare to FacebookShare to Pinterest
Labels: Holiday

We had such a fun day! Thanks for sharing the pics!