I started to write this post months ago. Then today something unrelated happened but it seemed to build from the first entry so I put them together.

Patrick was 9 ½  months old when we found out Madelyn would be making her way into this world the next February. I remember Patch and I taking our morning walk one day and stopped to chat with one of our neighbors up the street. She has a boy and a girl close together in age, about 16 months apart. She was positively exasperated, in that moment, with her pajama pants and uncombed hair, eyes dark and sunken from lack of sleep, warning me that the first year with two so close together was “complete hell.” I told her to go inside, get a cup of coffee and a shower- I’d play with the kids. She hesitated for a millisecond then pretty much sprinted inside, desperate for the solitude. Knowing that would be me a year from then I briefly wondered how I would handle it- sleep deprived, two in diapers, dividing my time, working (or not working- I wasn’t sure yet) and all the other challenges that came with the territory. I shrugged it off but it seemed like everywhere I went the reaction was the same. Congratulations! How close together? Oh my…honey you are going to be buuuusy. After a while self doubt crept in as I thought about the first year. But then again, a year is just a year. It will come and go. Even if it is as terrible as people told me, it’s not forever. And then I smacked myself when I realized that I was about to have two beautiful babies, all my dreams were coming true and if my biggest problem was that I'd need an extra cup of coffee and had to divide my time loving on this baby or that baby, that is probably the best problem to have ever. And so, the first year came and went, as they do, so fast and slow at the same time. So many beautiful moments and thankfully, not as many frustrating ones. The first year was hardly hell, it was glorious. Hard, sleepless, tearful sometimes but glorious. It’s the only year of my life when I mothered an infant and a one and ½ year old, the only year my Madelyn went from rolling to crawling to walking. The year Patrick became a big brother and started learning all that it entailed. The year our love was stretched and tested and grew bigger and stronger than we knew possible.

And now they are 2 and 3 and the best of friends. There are so many benefits to having them close in age but my favorite is that they are close enough developmentally to be interested in the same things and out of that grew a beautiful friendship- beyond being brother and sister. It’s funny though because I get even more comments now on how hard it must be when we’re out and about - such difficult ages and what not. Sure, we have our moments, our days where we just have to push through knowing that the next one will be better and brighter. Mostly though, we just play (as evidenced by the state of my house and piles of laundry) because I know this year will go even faster than the one before it and “school age” is just over the horizon (shudder). I’ll take the tantrums and meltdowns and the lack of sleep because I want it all - the laughing, playing, learning, witnessing them grow together, perfecting our little family of four. 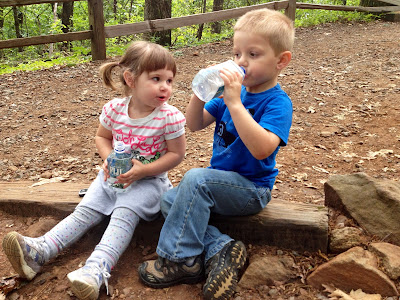 We lost a patient this week. He called me “Movie Star” and was constantly trying to stuff my lab coat pockets with packages of crackers and snacks each time I went into his room. He frustrated the nurses, rolled his eyes at the doctors and argued with pretty much everything anyone said to him. He was a grumpy old man with endless stories of fishing on some lake I can’t remember the name of right now. He never had many visitors and I always hoped he wasn’t pushing his kids away if they did come to see him. He loved them. I hope they know. I hope they didn’t believe him when he muttered ugly things to them or seemed ungrateful. Because he was grateful - they were all he talked about but he just didn’t know how to tell them. And now he’s gone.

I'm left broken. And I have six more patients to see. Six more lives that are fighting just to be here.

But, at the end of the day I get to leave this place.  I get to go home to my beautiful, healthy children, full of life and drama and questions. I get to see my husband and unload all of this onto him as he patiently listens. A smile spreads across my face as I degown and glove in the scrub room knowing that  tomorrow my day will be filled with squeals of laughter, fits of giggles, possibly a fight over this toy or that, maybe a tantrum or two, and I’ll take it. I’ll embrace it - all of it - because its so fleeting. Time slips through our fingers and then we’re left with only memories of chubby cheeks pressing up against our face and tiny arms wrapped around our necks, the smell of baby shampoo lingering on downy hair…I love this place for breaking my heart time and time again, for reminding me how lucky I am, how small my problems really are and for making me desperate to envelope Patch and Maddy in a huge embrace and smother them with kisses. I am so thankful to be humbled to the point of breaking once in awhile if just to remind me what's most important.

I always love love love your perspective, especially when it comes to parenting. You help remind me what's important, and I appreciate it!

note to self: don't read Angie's posts while my employees are around to see me cry!

Angela,Angela,Angela what a gift you bring to the world. We are all blessed by your unending joy and trust in God's gifts and plan. ---would like to have another chance to be the Mom you are! Love, Meme