The actual day of Madelyn's second birthday, she had to go to school since Ang and I were both working.  She loved it though. She proudly walked into school and told everyone she saw "Hi! I'm two! Happy birthday Maddy!" Angie made cupcakes for her class too so she felt extra special that she had a treat to share with everyone. That night, I got off work a little early so I came home and Ang and I decorated the kitchen with balloons and streamers before we picked up the kids. I don't know what it is about balloons but our kids go crazy for them. A room full of balloons when they got home from school was like heaven. We had a really fun night with the exception of Maddy falling and hitting her head on the side of the stairs right after dinner. Poor kid. We thought the cake would help distract her but it instead overwhelmed her and she cried through most of the singing and candle-blowing. I only put that here so we can remember "oh yea, that was THAT year," and to explain why I don't think there are any pictures of Madelyn blowing her candles out in the photo album :) The rest of the night was awesome though and we couldn't wait for Madelyn's party with the rest of the family later in the week. 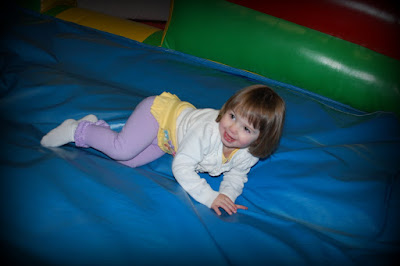 We always thought we'd save "destination birthday parties" (That's not really a thing. I just made it up.) till the kids were older. We figured we'd have their birthday parties at our house or something similar until they got a little bigger and we could really go some place fun with cool stuff to do. After Christmas though, we took the kids to The Bounce House and Madelyn LOVED it. I wasn't really sure how much she'd even be able to do there since she's still pretty little and a lot of the inflatable slides and bouncy...things...are pretty high and not so easy to climb. But, as usual, Maddy was determined to conquer the place and had no trouble getting around. I took the kids there by myself the first time they went and just told Angie about how much they enjoyed it. The first time we both went though, Angie saw how happy Maddy was and said "You know what, she's had kind of a tough year and deserves a really fun party. Let's have it here." And so it was decided that Maddy's second birthday party would be very bouncy. 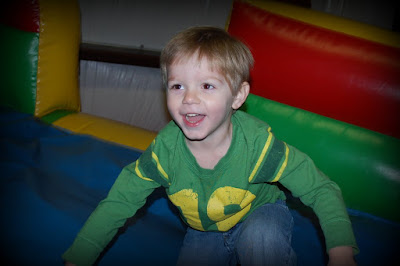 Needless to say, the kids had a blast. It was really fun to watch them all get to just run around and go nuts. They ran, they climbed, they slid, they jumped, they fell, they cracked heads, then they ate, went home and passed out (at least, that's what ours did when they got home). Selfishly, the other thing Ang and I liked about it was that we didn't have to do as much to prepare and there was almost no clean up :) 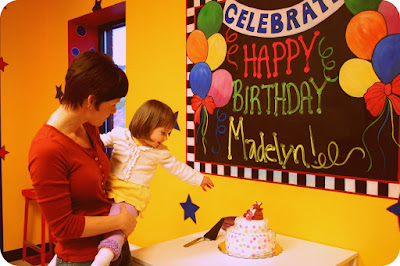 The only weird thing for us was that there wasn't enough time to have Madelyn open her presents while everyone was there so we had to take them home to do it. The good thing about it was that we got to space out the present opening so she could really enjoy them all. We opened a few when she got up from nap, a few that night, some the next morning. (Poor Patrick.Thank you to both sets of grandparents though for getting Patrick a gift to open too! It made the several rounds of Maddy gifts so much better for him.) But of course, we were kinda sad the family and friends didn't get to actually SEE her open the gifts. Just know that she seriously fell in love with every single gift. She wanted to wear every outfit the second it was open, play with every toy and read every book. 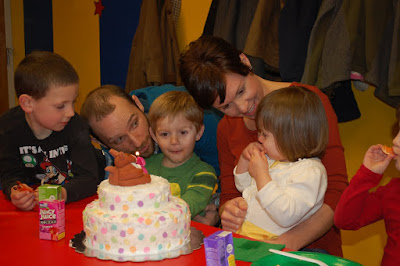 Like every year, I put together a quick video of the birthday party. I hope you're ready for a lot of jumping! (I love that Madelyn realizes half way through everyone singing that it's all for her and suddenly gets very shy...until she remembers there's a candy kangaroo on top of that cake.) Thank you again to everybody that came and played and spoiled our little girl. She's too young to know just how lucky she is but Angie and I aren't and we can't tell you how much we appreciate it.

And here's a slideshow of pictures starting with the day of her birthday at home and going through the party. Click here to go right to the gallery.

Accused of plate thievery! Why I NEVER!

Looks like so much fun!!! Im so glad that everyone had such a fun time! Well done again Angie and Toby!