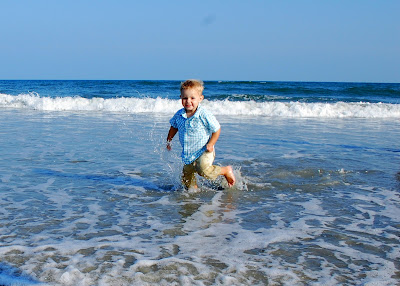 It's been awhile since we've done a "where are they now" post about the kids. Since Patrick just turned 3 and Madelyn 18 months, I thought it was a good time to catch up. We'll start with Patrick...

If I could sum Patrick up in one word right now it would be "Why?" That one word is probably 40% of what comes out of Patrick's mouth. Patrick's Why Phase started about a year ago. Which means I'm not sure it's really considered a phase any more. I'm sure he won't always ask why as much as he does now, but it definitely brings to light his extremely curious personality. Living with Patrick right now means that you have to be prepared to answer for every statement you make. Every sentence out of your mouth or action you take has to have reason or justification. He just HAS to know why everyone is doing whatever they're doing. Here's a pretty typical conversation at our house:

Me: Be right back. I'm going to take the trash out.
Patrick: Why are you taking the trash out?
Me: Because it's full and I don't want the house to smell.
P: Why don't you want the house to smell?
Me: Because I don't like things that smell.
P: But dinner smells and you like dinner.
Me: ...sigh... yes, that's true, I don't like things that smell "bad."
P: Why's the trash smell bad?
Me: Because it has old food in it and old food smells bad.
P: Why does old food smell bad because it's rotten? (He does this all the time too. He answers his own why questions but still forms them as a question. I'm never really sure how to respond to these.)
Me: Right, because it's rotten.
P: Why is rotten bad?
Me: Because it's yucky (this is where the conversation might end except that I always end up saying something that prompts another question like…) and will make us sick. (Me in my head: Dangit! Why did I add that last part!)
P: Why does rotten food make us sick?
Me: Because it's yucky and gross and has germs and mold and yucky gross stuff that makes us sick. (This is the verbal equivalent of a shotgun blast. Throw as many words and reasons into one sentence as possible and try to cut off all possible future questions at the pass.)
P: ...But why will you be right back? 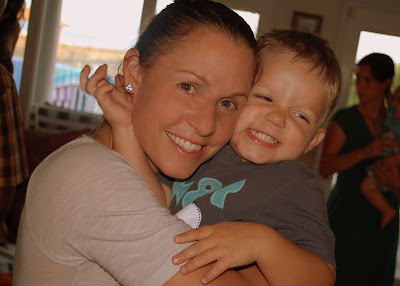 This seriously happens several dozen times a day. It's hilarious to us and although at times it can be exhausting, we wouldn't want it any other way. I think it doesn't bother us because he really genuinely wants to know the answers. He's not just wasting time or repeating the word "why" over and over to try to wear us down. He sincerely wants to know the reason for everything. The other night after bath he said something about a frog jumping around without a head. (He has a frog towel that he couldn't see the head on. We're not doing animal dissections at home…yet.) I said something about how he wouldn't be able to jump around without a head because he wouldn't have a brain. The second the sentence left my mouth I knew I was in for it. The questions came flooding with "Why can't he jump without a brain" and me trying to answer in a way that wouldn't prompt more questions. That's IMPOSSIBLE with a topic like this. I said something about how our brain is what tells the rest of our body what to do and how when we pick something up it's because our brain told our hand to pick it up and yadda yadda. Then he started asking questions like "But when my hand picks something up is it me telling it to pick it up or my brain?" I AM NOT QUALIFIED TO ANSWER QUESTIONS LIKE THIS. I felt like I was back in my college philosophy classes, headed down the ontological and epistemological rabbit holes, only, with a 3 year old. I tried the same tactic I used in those classes (falling asleep) but it didn't work. Luckily, it was time for me to read stories with Madelyn. Now I have some time to prepare for our next conversation. 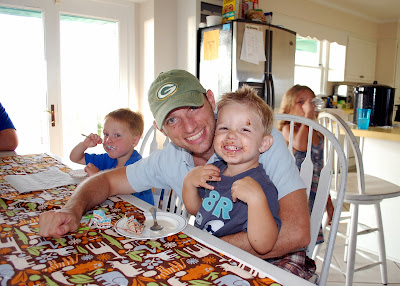 Patrick at three is wonderful. He suddenly decided that he is a grown-up and started getting himself dressed and undressed, jumped full on into potty training (which we've pretty much conquered other than night time) and asks to do more and more things for himself every day. If he's playing and realizes we're busy with Madelyn or something else but he has to go potty, he'll go to the bathroom, use his foot stool to turn on the lights and get himself on the potty, go, get re-dressed and wash his hands. All on his own. He moved up a class at school to be with the older kids (most are 9-12 months older than him) and has loved it. His teachers joke that some of their most adult conversations of the day are with Patrick and they love having him in their class. He went to the doctor yesterday and weighs in at 35 lbs. (72nd percentile) and is 37.25 inches tall (40th percentile...sorry kid, that's my fault).

He is still extremely cautious at first until he understands the full situation. But once he feels comfortable, there's no stopping him. If you watch the video from the beach you'll see that he jumped off the diving board, rode the waves on a raft, went down a water slide and broke out every dance move he had in the middle of 30 adults. He didn't leap into any one of these activities right away but once he was in, he was IN. 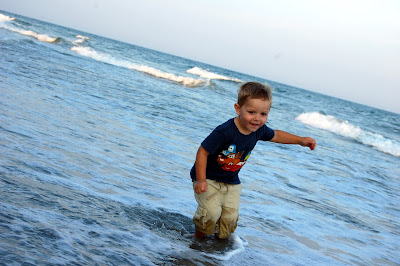 He still loves dinosaurs, rocket ships, animals and especially race cars.  We're constantly amazed by his memory on every one of these topics. He knows just over 30 dinosaurs and can tell us really specific details about each one of them. And it's not because we have dinosaur flash cards or make him tell us every dinosaur he knows every day. He'll also tell us what kind of car each one of his matchbox cars is and what year it was made. It's so fun watching his mind work and seeing all the things he remembers about what he's learned. Patrick also still fully believes that he can only REALLY run fast if he's in his underwear because his clothes slow him down. Thus, most of the time we're at home, he's in his underwear because he always wants to race us around the house. 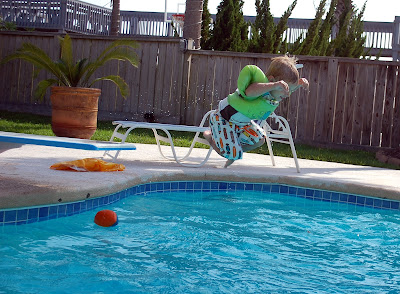 His favorite thing though is creating stories. His imagination is constantly churning up new adventures for us all to go on. If he doesn't feel like telling a story he'll just pick up a couple toys and come to us and say "Dad, tell me a story about my blue race car meeting his new friend the duck." or "Mom, can you tell me a story about a road runner racing a struthiomimus and they meet my Lamborghini?" Although, usually half way through the story he'll jump in and fix any perceived plot mistakes we've made.

Here's a video of Patrick after dinner talking about a spaceship blasting off. A video like this is really the best way to capture his personality. I love how intensely he tells the story and how he explains every detail of us climbing the ladders and fixing things and when Angie brings up taking Roxy along for the space ride it throws a wrench into the story and you can see his mind trying to work out how the dog will climb the ladder and fit in the spaceship and all the other details. And I left the first part of the video in with Madelyn imitating his blast off noises because I could watch that over and over all day. It's so cute how Madelyn wants to do everything he does.

Speaking of Madelyn... watching Patrick be a big brother has been amazing. One of our favorite things is watching him try to help Madelyn talk. Her vocabulary has been increasing lately and she tries to say almost everything we do. Patrick couldn't be happier. He walks around the house and explains every object to her "Maddy, this is the shoooopppiiinngggg caaaaarrrrttttt. Can you say that? We put our toy groceries in it. Can you say "groooocccceeeerriiiiiiiieeeeees?" When they play outside he's become very protective of her and will get worried if she's more than 15 feet away from us. He'll yell for her to come back and if she doesn't (she doesn't) he'll walk over and say "Let's just hold hands Mad. You can walk wif me" and he'll bring her back to where he thinks she's safe.

We can't wait to see what parts of his personality we'll be introduced to over this next year. Every new discovery has been a joy for us to witness and we're so blessed that we have Patrick in our lives. Not a day goes by he doesn't make us laugh. We love you Pat Pat!
Posted by Toby at 9/02/2011

So great to have these moments captured---there is no way I could retell this to him at 16!---not because I will be 78 then---because I could not retell it today!. All JOY that is what Patrick and Madelyn are! Love, Meme

He is such a brilliant, loving boy. His inquisitive nature will take him so far in life. It's such an amazing gift to be able to watch him grow up.

I love reading about Patrick & Madelyn and watching the videos...thanks!