Friday we let Patrick open one of his gifts in the morning before I went to work. He's been really into race cars lately and it surprisingly has nothing to do with the new Cars 2 movie (although, that doesn't stop him from loving Cars). Patrick has specifically latched on to Roary the Racing Car for some reason. Birthday morning, Patrick got three matchbox-type race cars to tide him over for the day that were all characters from Roary. He was ecstatic and spent the rest of the day racing around the house making every race car sound he could think of and narrating the race as if he was an announcer. That night when I got home, we gave him the rest of his gifts. We all know how the race car bed went, but he enjoyed the rest of his new toys too. Here he is modeling his new magnifying glass and binoculars. 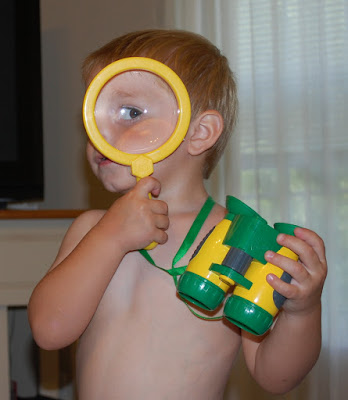 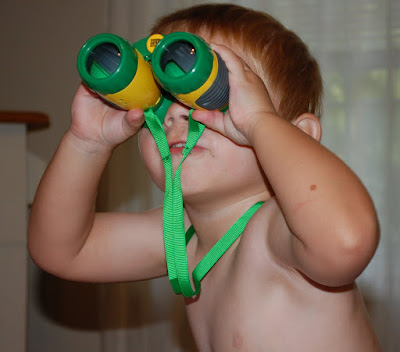 On Saturday, we woke up early and baked 36 cupcakes for the party. About half of them would be used to make Patrick's race car cake. The other half would eventually fall off a car and have to be re-baked, but that's a different story for another day. Patrick really wanted a Roary cake but since only 6 people in the world apparently know who Roary is, there are no Roary cakes. The best we could do was a red cake that we told him was Roary and the little man in it was Patrick getting to drive him. He was happy with this answer, thankfully.

We met at the Suskays and Grandma, Abbie and Matt, and the Garitys all came over to help out. 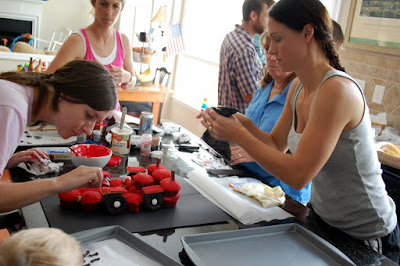 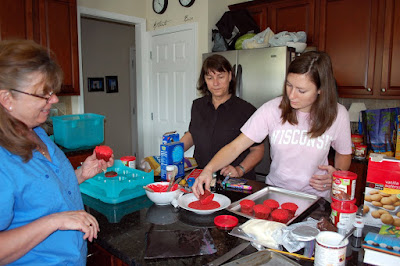 While the wonderful cooks worked hard on the cake, the men were assigned the job of keeping the kids entertained outside. This Dad gig can be pretty rough sometimes. 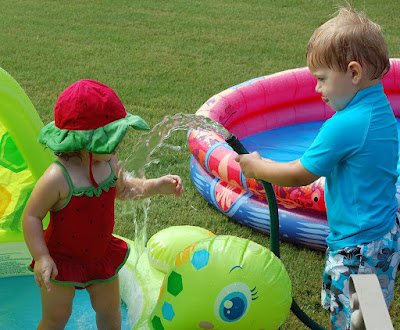 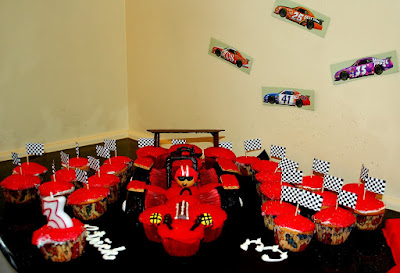 Sunday was party day. We had such a fun time at Patrick's party. There really are few things in the world that make us as happy as just getting together with our family and friends. And times like this always remind us how blessed we are to have huge families and tons of friends that care about our kids. We're constantly blown away by the love shown to our children. That people will take time out of their weekend to come and celebrate Patrick's life with us is truly moving. Thank you to everybody that showed up and celebrated with us, sent cards and gifts in the mail or called to say happy birthday. We love you all! 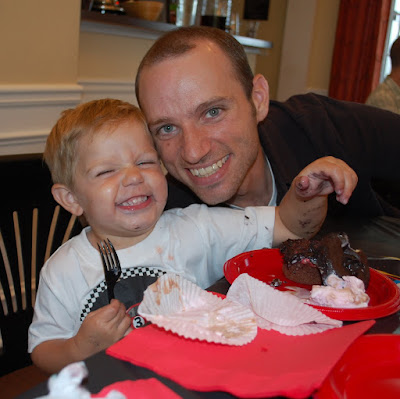 Patrick had an amazing time at his party too. The kids played hide-and-seek, ring around the rosy, "jump up and down" and just general chasing, rough housing and getting sweaty. They spent a ton of time on the back deck despite the million-degree heat and even made good use of the playground once it cooled down a little. In the video below, I love his face while we all sing happy birthday to him. He looks so happy to be there and so happy to have everyone with him. The big cake in front of him didn't hurt either, I'm sure. He's talked about his party every day since and has played with every toy at least once a day too.

As we were leaving the party, Grandma mentioned that there's a lot of pressure on me this year to deliver a good birthday party video. She said a certain expectation had been set by the video I did last year. She also said that, like the second birthday party video, I need to use a song that you can listen to over and over again without getting tired of it. I had originally planned to use a couple songs Patrick likes right now but they're in either French or Spanish and definitely don't have much replay value - unless you're a three year old, of course. With that in mind, I picked one of Patrick's favorite songs from the first Cars movie that we listen to after dinner almost every night while we dance and race around the house. It was a lot of fun making the video and getting to see some of the party I didn't notice while we were chasing the kids or opening presents or whatever. So here you go, Patrick's third birthday party video...

Here are some more pictures from the party. You know the drill: slideshow below or all at once in the gallery.

I am beginning to think that there's a conspiracy between you guys and the Beans to keep me out of all photos! I EXIST!

Oh is that so? Then you might want to check just a couple posts back in the Father's Day blog and take a look at THIS: http://2.bp.blogspot.com/-wJMFZmY9LFU/TgvQkahHIsI/AAAAAAAACIQ/ePVpwnwkJCw/s1600/M%2526JWalking.JPG

I believe that is you sir. You with your niece. In a picture that was too perfect to not post in the main article. I rest my case. Good day. Good day, I said!

What fun it was to celebrate with everyone! The pictures and video are perfect and bring all the memories back.

Such a joy---Patrick at three! I also want to document for future reference, Patrick at three, "why?", "why?". Patrick we all love explaining the world to you, thanks for asking!
Love, Meme

Birthday weekends and parties for kids are really very special. They want to make the best out with their friends and family of course. My daughter also loves to join such funny parties with her be sties. All of them are mostly organized at event halls for rent in our city. Actually they are really famous for their reliable services.