We recently had a pediatrician appointment for both kids. It was Madelyn's 1 year checkup and Patrick's 2 1/2 year checkup. They both did really well at the doctor. We were actually pretty surprised. Madelyn played with the doctor the whole time and even reached for her to be held. She was completely fine with all the poking and prodding and was just happy to have a new room to explore. We know her 18 and 24 month checkups probably won't go quite as smoothly so we're enjoying this one while we can. Patrick did awesome. He was so excited to tell the doctor all about the stethoscope he has at home and look at all the other "doctor tools" that were in the room. When the doctor pulled out the tongue depressor and asked him to open his mouth, Patrick asked "Why are you trying to look at my uvula?" To which the doctor responded "Well, I guess I don't need to ask how he's doing on his verbal skills!"

After the appointment, we realized we hadn't done an update on what the kids have been up to recently. So, here it is...
Patrick
Current Stats: Age - 2.5 years old; Height - 35.25 inches (28%); Weight - 32lbs (64%)
What he's been up to: The most noticeable difference in Patrick lately is his speech. He's always been chatty but lately he's started saying more adult things. As Grandpa says, "he doesn't just speak in sentences any more. He speaks in paragraphs." The other day he was doing a puzzle with Angie and she asked him "Is that a pair of socks right there?" and Patrick said "Great question, Mom! I think it is. You're probably right. Thanks for asking!"
His imaginative play has gotten more involved as well. He makes up elaborate stories about anything and everything. He builds forts out of pillows and blankets and will pretend all kinds of different scenarios. Sometimes it's his house that he needs to eat dinner in. Sometimes he's a dog and it's his dog house. Sometimes it's a hideout to get away from pumas or dinosaurs or coyotes. The possibilites are endless and it's a joy to watch his little mind work.
Here's a video of him telling a story about a toy frog he picked up. Really, I think he did this because it was bath time and he was stalling. I'm able to spot that kind of thing because, well, I was a stalling pro when I was a kid. But whatever, he doesn't need to know I'm on to his game just yet. Especially when it's so fun to watch. I know this video is a few minutes but I just couldn't find a good place to cut it. There was actually several more minutes of video but I ended up just choosing a spot to end it. I think my favorite line is, while trying on sunglasses, "I have to wear them because my eyes aren't good seers. My eyeballs aren't very good." Enjoy the story of Froggy Frog... (WARNING: If you are offended at all by the words "ribbit" or "jump" you should not watch this video. They are both said a million times in the first minute alone.)

Madelyn
Current Stats: Age - 13 months; Height - 29 inches (48%); Weight - 21lbs (46%)
What she's been up to: Everything. Madelyn is non stop. She's always moving, exploring, making noise, babbling, running, giggling and more. She's become even more independent and finds friends wherever we go. It doesn't matter where we are, if we put her down for a second, she'll wander off to find the nearest person and just casually follow them to observe them. Most of the time she'll go over and touch them so they look at her, then she'll just stare and smile. She's recently gotten more playful with Patrick as well. Now that she's able to hold her own a little more since she's very stably walking, she likes to run after him or be chased by him all the time. Really, she just loves chasing in general right now. Most nights after dinner are either a family dance party with music and being silly or a big game of chase where we run after the kids and tickle them. She also just seems more silly lately. She gets what it is to make people laugh and it's really cute to see what she comes up with to try to make it happen.

At school, Madelyn just moved out of the "baby room" and into the First Steps class. Today was her first official day there and she did awesome. They were going to take a week or two to transition her by having her spend some time in the baby room she's used to and then some time in her new class but she wanted nothing to do with that. Once she was with the bigger kids, she wanted to stay. Being in this class also means she doesn't sleep in a crib anymore at school. They all have little nap mats they sleep on on the floor. Picturing Madelyn sleep on a little mat on the floor is just about the cutest thing I can think of right now. I may have to take my lunch one day to drive up to the school and see her sleeping :)

Maddy is also a big fan of animals and books. She LOVES to read books all the time. Any time we sit on the floor she finds the closest book, comes over and sits on our lap, shoving the book in our face so we know she wants us to read it to her.

Here's a video of Madelyn playing with one of her favorite toys. If she's ever in a bad mood, just turn this thing on and she'll cheer up immediately...

As for the two of them together, they're great. Obviously, they have their moments. Madelyn's new mobility and confidence means she gets into Patrick's things more often and tests his patience. Most of the time he handles it well, by giving her other toys to play with as a distraction or just asking us for help. But, he's only 2 so he definitely also has his moments of just shoving her down. All in all though, Patrick loves that Maddy is able and willing to play more. He makes up games for them to play and tries to teach her everything he knows. Madelyn loves everything he does and constantly looks to him for entertainment and direction. They've had lots of sweet moments together lately. I wish I could capture every one of them. Here are a couple I was able to catch on my phone... 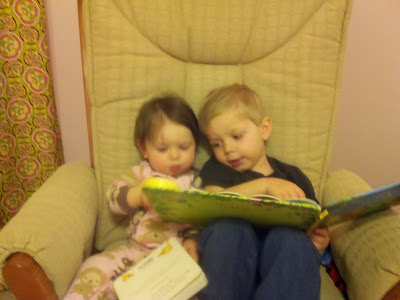 Oh my gosh they are so cute reading together!

"Why are you trying to look at my uvula?"--made me laugh out loud! They are priceless. Love the picnic dinner and can't believe how big they're getting! They're awesome.

They have changed so much since our visit to see you guys in early Feb. Loved the videos and pics!

WOW, I can't believe how much they both have changed!
Patrick might be a story writer. I really got said when Froggy didn't find any friends until he met some in the bathroom.
Maddy always puts a smile on my face and reminds me of me when I was young. I love how little toys like that can make our pretty girl happy. Her smile is contagious!
Thank you for capturing all these great moments!