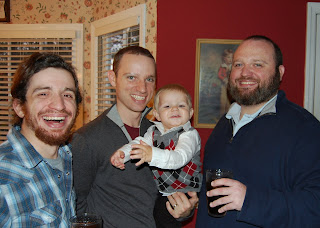 We had a great turkey day. We spent the morning relaxing at home making food and having Patrick paint hand-print-turkeys. Then we spent the afternoon and evening with the Flowers over at the Hopkins' house where we ate a great Thanksgiving dinner. Patrick had a fun time terrorizing the dog (mostly on accident), pointing at and naming everything in their house and just being loud and silly with his aunts and uncles.
The next morning we packed up and headed to the Suskay Cabin. We spent Friday and Saturday there doing a lot more relaxing and eating. Patrick got his first flashlight, helped plant a tree, raked a lot of leaves and learned about the Buckeyes (thanks Matt - "go go go!").
Here's a slideshow from November. If you want to see all the pictures at once though, you can visit the picture gallery.
As for the rest of life, things have been very busy but very good. Patrick turned 17 months old today which is kind of insane. I can't believe he's almost 1 1/2. We took him to the pediatrician a couple weeks ago for his H1N1 follow-up and he had gained two pounds in the month since he had last been in! He's also about 31 inches now.
New things he's doing...there are a lot. He's talking non-stop now and repeats everything we say. When he gets bored playing with 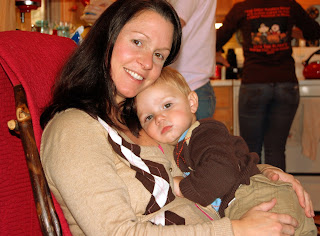 toys or reading books he just walks around the house naming things and telling us the story of what last happened there. Which is another cool thing he's started doing lately. He's made the jump from just saying words to actually trying to put the narrative together around his day using the words he knows. So, he'll walk on the front porch where I just recently put our garland and lights up and say "Daddy...garland...lights...up high...plug it in...turn on...preeeetty." It's so fun listening to him recount his whole day and see what he remembers from it. We'll try to get some video of him chatting and post it. 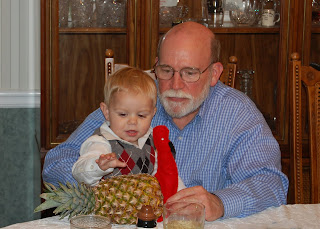 Angie has officially entered the third trimester which is very exciting. Madelyn's doing well and growing right on track. They actually said our due date may be about six days off which would put her being born in early March. We'll be painting her room this weekend and then finally getting her furniture out of our dining room and up into her room.
And finally, Patrick got to meet his brand new cousin, Carson Bean last weekend. We took a trip over to the Bean's house to visit with them and let Patrick meet Carson for the first time. He did really well with her actually and was very sweet and gentle. He had a few seconds of jealousy/weirdness the first time he saw me holding her but once he got to look at her up close and touch her he was fine with it. The rest of the time we were there he alternated between being very cuddly with her and us and completely ignoring her and trying to play with the dogs and fish.
Now...DANCE BREAK!... 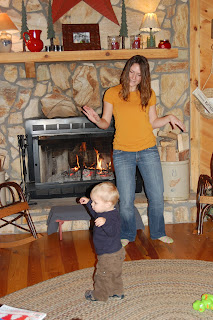