One of these Sundays...

Every Sunday morning we go to the 8:45 mass at St Ann's. I have to get there a little early because I play drums for the service and need to setup, get a sound check, etc. That means we have to get the whole family going kinda early in order to make it, which is fine because we're up pretty early anyway. But something about Sunday morning just doesn't want to agree with us.

Last Sunday we were doing great. Ang got up at 6 to get herself ready and after she showered I woke Patrick up so he'd be ready to eat by the time Ang was done. While Patrick was eating and getting dressed, I got showered and we were ready to go. We were actually a little bit ahead of schedule 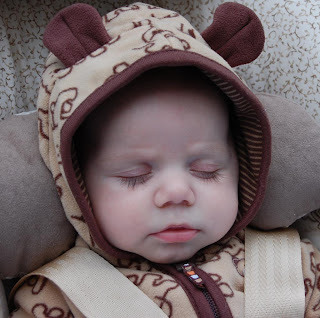 (which is how I should have known we weren't really about to leave). Right as we were walking out the door, I thought I'd hold Patrick above my head because it always makes him smile. Of course, as soon as I lifted him to an angle where I was in target range, he emptied his breakfast all over my shirt and his. So, we both rinsed off, changed outfits and headed out. We were only about 15 minutes late in the end.


Yesterday we were doing really great. We left the house right on time and had Patrick dressed in the outfit he soaked the week before. It wasn't until after mass while we were standing around talking to people that we realized his outfit was on completely backwards. Oops.

We figured he probably needed a diaper change anyway, so we searched around for a classroom that wasn't in use to get him all cleaned up and straightened out before leaving to go to Grandma and Grandpa Flowers' house for breakfast. 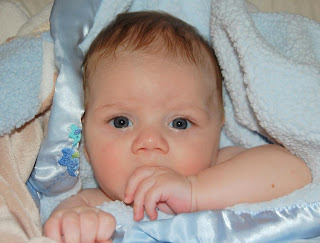 When we finally found one, we plopped him on the floor on a blanket and stripped him down. It was right in the middle of the process (while Patrick was completely naked and Ang was putting the butt paste on him) that little three-year-old boys and girls started filling the room for Sunday School. The Sunday School teacher walked in and looked a little confused as to why there was a naked baby boy on the classroom floor. Oh well, Patrick didn't seem to mind.

He seriously looks like he is trying to use his Jedi mind tricks to bring the toys to him. And I love how he just gets exhausted at the end. So cute!

The video was too cute he sounds just like his friend Preston! Welcome to the world of parenthood on the vomit and change of clothes thing. Thank goodness it wasn't a yellow blow out! I seem to get soaked in those from time to time.
Latanya